Park Beyond Takes the Rollercoaster to Infinity… and then Some! 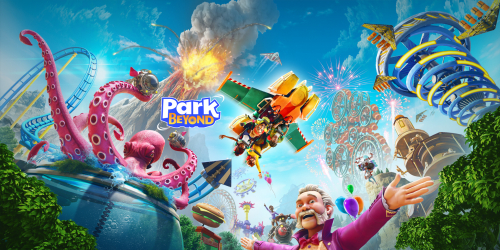 Why put a limit on imagination? International Hobo Ltd is proud to announce the release later in 2022 of Park Beyond, a revolutionary new theme park sim game published by BANDAI NAMCO Entertainment and developed by our friends at Limbic Entertainment.

"From the very beginning, this was a special game," says Chris Bateman, ihobo's founder and chief consultant. "Limbic had a vision to create something that broke through the limitations of the traditional theme park sim, and it was a huge honour to work with them on the narrative design and the script."

François Reinold, Executive Producer for Park Beyond at Limbic, was delighted by International Hobo's involvement on the game's ambitious narrative: "Chris and his team have a real instinct for how to get the most out of videogame stories. They're also extremely responsive to the challenges of game development – from fleshing out the concept, to recording the voice talent, ihobo have been there to support us."

Limbic Entertainment develops high-quality entertainment software for the global videogame market, with highly skilled and experienced teams in game and level design, programming, and art. They focus on PC and next-generation console games developed with Unreal.

International Hobo Ltd is the award-winning creative consultancy that coined the term 'narrative design', and has a strong history of commercial success with its client's projects. In 2019, their chief consultant, Chris Bateman, was selected to be the first writer to contribute to Bloomsbury's prestigious Writers' and Artists' Yearbook. Bloomsbury also publish the second edition of the seminal textbook, Game Writing: Narrative Skills for Videogames, edited by Chris, and featuring contributions by some of the major names in games narrative.