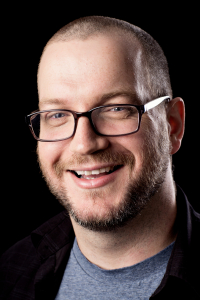 International Hobo is proud to announce the addition of a new member of their game design, narrative design, and dialogue scripting "family". Veteran writer Graham Goring, who recieved critical acclaim for his comedic writing on LEGO City Undercover and worked on eight games in TT's hugely successful cross-branded franchises, has become the latest consultant to join the International Hobo brand.

Graham's credits also include Planet Zoo, Planet Coaster: Console Edition, Elite Dangerous, Deaths Door, as well as supporting credits in Braid, Spelunky, Super Hydorah, Aquaria, and Titan Souls. As well as working on and with a great many developers on their projects, Graham is an accomplished programmer, and working on his own indie masterpiece (currently under wraps).

"We started working with Graham on Tropico 6," explains International Hobo Founder and Chief Consultant, Chris Bateman, "and immediately knew we'd found someone with a special talent for both comedy writing and understanding the narrative complexity of game scripting. As we kept coming back to him for more work, it made sense to offer him a seat on the core team. Our unique business framework allows talented individuals in the creative medium of games to gain the strengths and advantages of a larger organisation while maintaining a high degree of autonomy."

Graham had this to say about becoming a member of International Hobo: "Ever since I first heard about International Hobo in 1638 I have wanted to be a part of it. Alas at that time I was an earthworm, but thanks to a fortuitous series of reincarnations (jellyfish > duck > horse > dolphin > human) I eventually acquired the requisite limbs and brain-chunks to be a writer, and so here I am now."

International Hobo was founded in 1999, and over the decades has served as the consultancy framework for some of the biggest names in game design and writing, including Ernest Adams, Rhianna Pratchett, Richard Boon, and Wendy Despain, who still moonlights as a writer for International Hobo while officially working for ArenaNet, the Guild Wars developer.