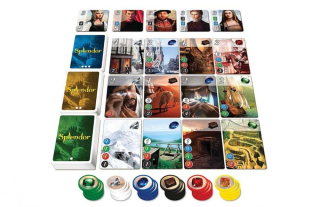 Here at ihobo, we rather enjoy a quick game of Splendor, and we're always looking for new ways to play. Since we also love co-op games, it did not take us too long to experiment with a co-operative version of the game.

Guilds vs Houses is a variant for the popular boardgame in which 2 players (the Houses) attempt to defeat an automated opponent (the Guild), who plays by a unique set of rules, described below.

The Guild's buying power massively exceeds that of the Houses, but its automated purchasing help balance its performance against the players' collective intelligence, as it seldom makes the 'best' purchase. If the players manage to co-operate, victory is attainable - but it does not take long for the Guild to build up substantial resources if it is left unchecked... The game is especially difficult if all the Noble tiles have similar requirements, and easiest when the Nobles have more distinct requirements. Good luck!

The variant might work with more than 2 players, but it has not been balanced for this - let us know in the comments if you try any variations!