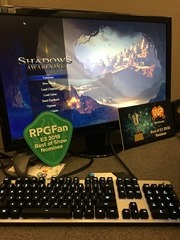 At this year’s E3 in Los Angeles, one of International Hobo’s RPG projects received two Best of E3 nominations, one from RPG Fan and one from WorthPlaying. The game, Shadows: Awakening – the latest instalment in the cult Heretic Kingdoms franchise that began in 2004 – is developed by long-time ihobo client Games Farm. Featuring an original narrative design and script by International Hobo’s founder, Chris Bateman, the game features characters voiced by Tom Baker, Sally Knyvette, Robert Ashby, Joanna Wake, Ramon Tikaram, Marc Silk and many other talented actors and actresses.

Due for release later this year by publisher Kalypso, Shadows: Awakening is an action RPG set in a dark sword and sorcery world. The player controls a Devourer, a kind of demon that can swallow the souls of the dead and manifest them as puppets. But who is really pulling the strings? Find out later this year!