Why Niantic's Gym Gamble Could Pay Off 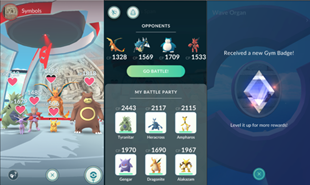 What does Niantic hope to achieve with its substantial update of the gym system in Pokémon GO, already in progress? Is this about bringing in more players, maintaining the existing community, or improving monetisation?

Almost all news services this week have reported on the major update to Pokémon GO that is rolling out globally right now (the Android update is already available, and the iOS update is not far behind). The hugely successful Augmented Reality (AR) game still pulls in some 65 million monthly active users (MAU), which while not in the same league of the behemoth Candy Crush Saga at 405 million still makes it one of the world’s most popular games. For context, the entirety of Activision’s product line (including Call of Duty and Destiny) makes up 40 million MAU and all Blizzard’s monthly active users (including World of Warcraft and Overwatch) amounts to 41 million. Whichever way you look at it, Pokémon GO is a serious player in the market for games.

The changes coming in the new update primarily involve the gym system – but not the battles themselves, which remain unchanged. Rather, Niantic are redefining the way pokémon are stationed in gyms, providing new ways for players to engage with their local gyms and (in a further update coming a month later) adding Raids that are modelled on the endgame concepts popularised by World of Warcraft. You can read the most complete description of the changes from Niantic’s support article about the update.

Most sources have correctly reported that the new system limits only one pokémon of each type to a gym, transforming the meta-game and ending the days of gyms containing a depressing multitude of pokémon’s tedious ubertank, Blissey. Most mention the arrival of the new Motivation system and the consequent retiring of the old Prestige system, which asked players to train at friendly gyms to increase the number of pokémon that could be stationed there. However, few have commented on the significance of these changes, and very few mention the most crucial aspect of this overhaul, which means players with less time spent in the game have a chance of participating in the gym battle system.

This, indeed, appears to be the primary motivation for Niantic’s overhaul. The current gym system suffers from major king-of-the-castle problems: players who have been playing from the beginning are now at approximately level 30-36, and can field pokémon with more than 3,000 Combat Points (CP), the measure of the little beasties’ strength in battle. Crucially, these high CP monsters lock up friendly gyms and make it very difficult for new players to have any involvement whatsoever in what’s going on in their local battlegrounds. New players are frequently unable to do much at gyms until they clear about level 20, and even then, there is an inescapable feeling that they are outclassed by the ‘big guns’ who have been playing for longer. This is never a healthy state for a player community: newcomers are all too easily discouraged.

The update not only limits the number of big guns in each gym by only allowing one pokémon of each species, the new Motivation system radically changes the nature of gym defence. Motivation is a morale system – as the gym defenders are defeated in battle (or whenever they lie idle and don’t get to fight at all), they lose Motivation, which reduces their effective CP value. This makes them easier to defeat, which lowers their Motivation further until eventually they give up and go home. Taking a gym is now about the pokémon chosen to defend, not about Prestige, which in the old system could be reduced by battling just a few of the gym’s defenders.

Crucial to the success of this new system is this line from Niantic’s notes:

To help balance different Pokémon strengths and abilities, stronger Pokémon generally lose motivation more quickly than those that are not as strong.

Now the actual game implications of this design element will not become clear until the update has fully rolled out and Niantic turn the gyms on, but it is clear how this is intended to function: putting in ultra-strong 3,000 CP pokémon is no longer the only viable strategy for gym defence. These pokémon lose morale faster, and thus will presumably get kicked out of gyms faster. The new dominant strategy for gym defence, therefore, depends on finding a sweet spot in the strength of the monsters deployed to gyms – too strong, and they will suffer a crisis of morale too easily; too weak, and they’ll roll over in battle without putting up any serious resistance. The fact that there is a sweet spot to discover – and that it could be different in each local area – revitalises the gym system in a way that is highly likely to reinvigorate the interest of its existing players, as well as potentially bring back some that left it over its first year.

There’s an important ambiguity, however. Although it is something most Pokémon GO players are unaware of, the Prestige system for gyms (which is being retired) created a role for weaker pokémon as ‘prestigers’ who trained at friendly gyms to raise the Prestige and increase the number of available slots. The second-string monsters were relevant since bigger Prestige bonuses were awarded for using weaker pokémon to train, creating interest in a whole raft of relatively weak pokémon that would otherwise be useless. (I have been maintaining an army of Furrets for this very reason.) With Prestige going, there is a big question about whether the only useful gym attackers will now be the high CP pokémon – effectively undoing a great many of the benefits of the new system. However, if defenders lose more Motivation for being beaten by weaker pokémon (which would be sensible, but that doesn’t mean Niantic have done it…) there could be seriously interesting questions about which team to take into each and every gym battle.

The community is showing overwhelming support for the new changes, although there are some concerns about alterations to the rewards for defending gyms. Previously, you could collect PokéCoins (which are the in-game currency that can be purchased with real money transactions) once every 21 hours, amounting to 10 coins per pokémon defending gyms, up to a ceiling of 100 per day. The 100 per day cap still stands, but now you only get coins when your pokémon loses its morale and returns from the gym. This creates substantial uncertainties that some players are already getting anxious about. It’s not clear this will end the strategy of ‘gym squatting’ or not: players still have a motive to deploy many pokémon into gyms, and it’s not up to them when they return, which creates worries about yet further advantages to ‘gym shavers’ who (against Niantic’s terms and conditions) have multiple accounts belonging to different teams so they can manipulate the gym situation to their personal advantage.

What is very clear about Niantic’s plans with this gym update is that it is all about strengthening the community around local gyms. Players of all levels can give berries to defenders of their team to help them stay on – allowing players to effectively ‘vote with their berries’ as to which gym defenders they want to keep. Furthermore, players earn status with gyms to level up gym badges to give them advantages. These changes help make a player’s relationship with their local gym stronger, which could have beneficial results for player experience. Add to this the Raids (which will start in July) that will create community events at local gyms, and this could give a serious boost to the sense of player community that Pokémon GO engenders.

Making a radical change to core game mechanics is always a risk, but Niantic seem to have thought this one through quite carefully, and it certainly has the potential to invigorate the existing player community and bring back a few players who left out of either boredom or frustration. There are still a lot of unanswered questions, particularly in terms of whether the motivation system truly breaks the pokémonopoly of Blissey, Dragonite, Snorlax, Rhydon, Gyrados, and Vaporeon, which dominate every gym I have visited anywhere in the world. But even the possibility of thoroughly shaking up the meta-game is one that players of Pokémon GO are excited about. Let the battle for the pokémon gyms begin – again!

Are you a Pokémon GO player sad to lose the Prestige system, or excited about having to only fight one Blissey per gym? Leave a comment – we’d love to hear from you!