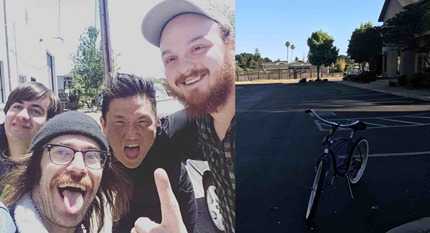 A little over a week since Niantic put the new Gyms system and Raids live in Pokémon GO, and the backlash is gradually being drowned out by the support for the way the year-old game has been reawakened by a cleverly imagined, although clunkily implemented, revision to a major part of the core game. The state of the player community is aptly summarised by these two pictures. On the left, five strangers (GPS spoofer not pictured…) took down a Tyranitar in a city in the US… on the right, someone turned up for a big Raid and found nobody there. Indeed, there’s far more of the experience on the right at the moment than the one on the left, but when it works, players are ecstatic about the Raids – and the fact that all three rival Teams can battle together makes it far more open than anything else in the game.

I mentioned before that there were too many Raids triggering for it to fulfil the needs of event gameplay, which is something any AR game wants to create if it can. Pokémon GO has had the most success with this by virtue of the power of the Pokémon brand. However, while I stand by the assessment that the sheer ubiquity of Raids makes no-shows far too likely, the one aspect of this set-up that could work out is that a group of players that set out to attempt a Raid together will have a good chance of finding one that would suit them, and big wins will generate a lot more social media buzz than the no-shows, which will be largely invisible in the secondary media. I have suspicions that part of the problem with Raids is that the app can only hold a relatively small geographic chunk of data in memory at any one time, and thus Niantic are not set up to flag Raids city- or county-wide… if they were, there are much better ways of designing the Raid allocations than those we’re currently seeing.

Meanwhile, and quite fortunately for Niantic, the furore over coins is starting to die down as players gradually adjust to the new arrangement. It becomes clearer and clearer than the most outraged players are the ousted nobility of an economy that was akin to a pyramid scheme in rewarding the players who had been at it for longest while excluding everyone else. Not long after the update, Niantic brought the cap on the Gym Defender Bonus down to 50 PokéCoins per day, but raised the rewards to 1 coin per 10 minutes (immediately after the update, it was 1 coin per hour up to a maximum of 100 per day), which didn’t go down well. But what’s becoming clear is that instead of 1-2% of players getting 100 coins a day and 5% of players getting 10-20 coins per day, now anyone who wants to can get 50 coins a day, at least if they’re not too close to the centre of a city nor too far away from any major settlement. (As someone who grew up on an island only 30 miles across, I can feel the pain of the rural players right now…)

The real switch in people’s heads is in understanding how everyone now gets ‘paid’. It used to be a salary system, where the pay was proportional to the number of Gyms occupied (up to 10). This encouraged squatting in Gyms with 3,000 CP overlords that the majority of players – especially those coming late to the game – could never match. The new pay is a mediated lottery system, because it’s not hard to get a pokémon to hold a Gym for 8 hours and get the full 50 coins (if you’re up late at night, it’s even easier!), but you need to ensure that you get at least one monster returned to you each day, and this isn’t something you can guarantee. Rather, the more defenders you put into Gyms, the better chance you have of getting your expected earnings.

The new Defender rewards is far a subtler system than the one it replaces.. you are going to get lots of creatures coming home in bandages at the weekend, when there’s a lot of player activity, so it can feel like those coins are ‘wasted’ when players still think in terms of salary. But the dominant strategy for the the new coin system revolves around ensuring that at least one 8-hour Pokémon comes back each day. I predict it won’t be long before players complain less about getting multiple monsters back at once (which at the moment feels like having ‘lost’ money, because of the comparison with the old salary system) than about living in an area where nobody comes and battles at their Gyms ever. These complains already exist, but those voices will get louder and more bitter the longer the situation persists, always assuming the players just don’t drop out entirely.

Urban players will quickly adjust to the idea that they’re going to be getting a steady 50 coins a day now (50 cents USD/40p GBP) – and I estimate 10-20 times as many players getting that full pay-out from Niantic than were getting it before, which is obviously a win for the game in terms of engagement and player satisfaction. At the same time, rural players are going to find their Pokémon stuck in Gyms and getting no coins at all. They’re asking for a button to recall the Pokémon – but this would break the Gym system. Niantic ought to be thinking about what they can do to balance the city and the countryside, although as a strict commercial decision it does make sense to favour the densely populated areas over the sparser regions. Still, they would earn a lot of brownie points for being responsive to this issue.

There’s one last issue: Stardust. It is used in the game economy to power up pokémon, and under the old system it was the scarcest and most valuable resource because it could not be purchased directly by IAP, unlike PokéCoins. Players who were earning 100 coins a day used it to purchase Egg Incubators because these pay-out the most Stardust, but they also got 500 stardust for each Pokémon in a Gym (up to 5,000 maximum per day), which was enough to power up a high level monster once, or a low level monster twice. Under the old ‘Overlord’ Gym system, Stardust was essential because you had to be competitive on Combat Points (CP) to stay in a Gym. But under the new system this simply doesn’t matter because visiting Gyms frequently is much more important than having played the game for longer than everyone around you. Players who became used to having a lot of Stardust (the toppled nobility) are feeling the loss… but for most players, the new arrangement is simply better for them than the grind-heavy old regime, even if the 10 Stardust per berry fed at a Gym is peanuts next to what used to be paid out.

Right now, Niantic are doubling down on bug fixes, since launching two new systems at once has understandably broken the game in dozens of different ways. The real testament to the success of the Raid system is that players who form a group and beat a strong Raid Boss enjoy the experience so much it completely blows away their irritations over fatal crashes, bar display fluctuations, and other such problems that in a less popular game would be fatal. With a week of Raids now over, I’m going to call the update a qualified success for Niantic – and it’s going to be interesting to see what it means for their revenue when that data is released. For the time being, though, there’s never been a better time to be part of the 65 million strong player community for Pokémon GO.