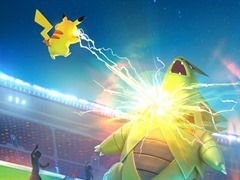 Has Niantic hurt its player community with the new update, or has it succeeded in raising engagement and monetisation? This question is not yet fully resolved, but after the first weekend of Raids and Gym battles under the new system, we have a sense of how things are going for the 65 million-player augmented reality game.

As both a player and as a videogame consultant, I’ve been keeping a very close eye on how the new Pokémon GO update affected the player community over the weekend. It was a significant event in the game’s history, because multiplayer co-operative Raids are now live for all players, having previously been through an interesting Beta-by-level countdown (such that, for instance Level 35 players had first access, then Level 30 and so on). The Raids are an important part of Niantic’s monetisation strategy going forwards, so they need to work well enough for that to pay off for them.

The good news, for both players and Niantic, is that the Raids have been very well received, offering a new kind of battle to the players that are exciting and engaging. But there is a problem. The Raids are clearly intended to be event gameplay – the idea is that groups of players get together to fight a powerful Raid boss together. But this hasn’t happened. So far, in all my skimming around Raid sites, the most I have found at any one is two players, and a single player or none at all is more typical.

The problem is, there are currently far too many Raids triggering at once. The Raids only work as events if players all descend upon one Raid together – which is clearly intended, because the monetisation of Premium Raid Tickets (IAP $1 USD or 79p GBP) is the big win that Niantic is aiming for in the new system. With one free ticket a day, and dozens of Raids to choose from between 9 am and 9 pm, players are not congregating for the Raids at all. Perhaps Niantic is expecting players to self-organise for this. If so, they are being optimistic.

On the plus side, the new Gym update has brought the player community out of hiding. Outside of Raids, I have encountered more Pokémon GO players in the last three days than in my entire time with the game thus far. That’s a win for Niantic – the revision of the Gym system has worked as intended, and it has ended the domination of 3,000 CP overlords. Now, more players than ever before are able to get pokémon into gyms, and more different kinds of beasties are appearing in gyms as players realise that the old rules don’t apply. This has also generated a lot of free publicity in social media, with images like the one above circulating rather well online.

But while players who had previously been marginalised are now coming out of the woodwork, the existing PokéNobility are still seriously offended by the changes to the coin rewards, as I discussed before the update went live. This is an ongoing mini-scandal, and how offended players are about it depends on how well they were doing out of the old system. There’s a certain degree of the aristocracy-after-the-revolution about this sour grapes, especially since it was the vast minority of players (I reckon between 1 and 5% of the player base) that were benefiting from the old regime.

Don’t think, however, that this means that the new PokéCoin system was clever design work on Niantic’s part: one of the serious problems with the way the new system works is that players have lost control of how their rewards are received. Previously, players chose when to take their PokéCoins, and this setup allowed even marginal players to get some coins every now and then. Now, players have absolutely no control over when they get rewards. You don’t get coins until your pokémon are ejected from gyms, and this happens when another team decides to attack. Players feel understandably set adrift by this, which is bad for player satisfaction, and (perhaps worse) it is an additional incentive for players to start secondary accounts – which Niantic are publicly opposed to.

Overall, this new update has been a good news, bad news kind of affair. My impression of the response from the player community is that the benefits have outweighed the costs for the majority of the players, but that a minority of well-established players are displeased by the toppling of an empire that benefited them greatly. That said, no-one is happy about a reward system that quashes player agency and creates huge ambiguity about how to earn rewards by playing the game. On this front, Niantic have some crucial fire-fighting ahead of them.