This is a critique, not a review. My review is: ‘if you care about artgames, you should buy and play this game’. 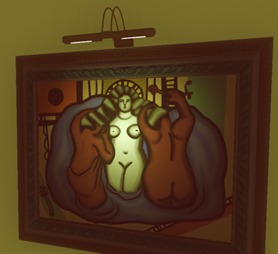 The moment I finished playing Sunset, I went on to replay Façade, one of several games in 2005 to put artistic motivation firmly back into play for videogames, after languishing for decades out of anyone's concern. Façade was a landmark artgame: it reinvented the commercially dead adventure game genre as a means of delivering theatre, taking the one room, small cast format of an off-Broadway play and making it into a game. Sunset, released by Tale of Tales in 2015, revisits (probably inadvertently) the idea of taking cues from theatre while simultaneously developing something entirely original and unexpected. In so doing, it shows the remarkable distance artgames have travelled in just ten years.

Sunset is the most luxurious artgame to be released without a publisher, a testament to the capacity for crowdfunding to open up previously impossible development pathways and facilitate utterly original projects. This plush element could easily go unnoticed, but anyone who has worked in game development could not help but notice the clean, elegant interface. The control panel for the elevator that leads to the games’ apartment serves as a control panel, and from here an options screen that would be the envy of any indie game can be reached. To exit the game, you click a red button, and the panel slides across the screen; to confirm, you press red again, completely defending against accidental exit by moving the button between actions. Having played almost all of Tale of Tales previous games, this attention to small interface details immediately reveals the larger budget at work here.

Yet the interface is also feels like a site of tension... here, for the first time Michael and Auriea (the beating heart of Tale of Tales) accept the interface practices of gun games, two-handed, move and aim. True, an alternative is offered – but buried in the beautifully designed options such that anyone who might need it would likely lack the game literacy to find it. Thus, as with Dear Esther, we find ourselves in a first person shooter without guns – the derogatorily named ‘walking simulator’ insult-turned-banner-of-pride that serves as a perverse testament to the games industry’s utter dependence upon firearms and violence for producing commercial entertainment.

There are guns in Sunset, but you never see them. Indeed, this is a game that spectacularly eschews conventional spectacle. Throughout the games’ slowly-unfolding story, a civil war against a 1970s South American dictatorship is witnessed both from a distance – the sound of gunfire in the streets, an explosion at a neighbouring building – and from the intimate inside, since the player serves as maid to a key politician-turned-rebel. It is an ambitious, highly theatrical staging, and admirable when it works, which it does more often than not. As Emily Short comments of the narrative, however, it struggles with both its thematic focus and some occasionally muddy moments of exposition.

Yet to treat Sunset purely as a narrative game is to rob it of its greatest achievement, and perhaps also to misunderstand one of the layers of meaning wrapped up in its name. For while it is metaphorically concerned with the sunset on the Anchurian dictatorship, it is also at the same time quite literally concerned with sunsets, and every moment of the game occurs against one. In so doing, it takes one of the most tangential artefacts of commercial game design and makes it the star of the show; for it is not the protagonist, Angela Barnes, who can claim that title, but the most literal star in the game: the sun.

Ever since The Legend of Zelda: The Ocarina of Time in 1998, I have been revelling in virtual sunsets. The day-night cycle was ostensibly added for gameplay purposes, perhaps because most game designers (‘planners’ in Japan) have a slender appreciation of the power of visual aesthetics. Yet I can think of nothing more spectacular in 2004’s Grand Theft Auto: San Andreas than its sunsets, particularly because each region had its own colour scheme and painted the most glorious tableaux at the end of each day, burned into my memory far more deeply than its casual violence or lacklustre pastiche of John Singleton’s Boyz n the Hood. 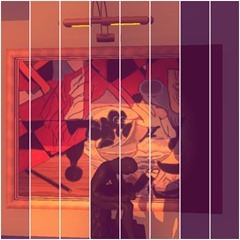 In Sunset, as the title makes clear, the sunset is the empress of its tiny world. Yet rather than gaze at the landscape, as I did in GTA or Ed Key and David Kanaga’s Proteus, Tale of Tales’ game populates its apartment setting with artworks – paintings, sculptures, tapestries. While lacking the palpable tangibility of real gallery works (you have never seen a Van Gogh painting if you have only seen a print, for the furrowed grooves of his brushwork is everything), the works the team of artists has produced for Sunset are perfectly suited for their milieu. They show up every subtle shift in tint and shade as the sun crosses the imagined sky, and as a player the option to turn on a lamp and further illumine each piece is an act of agency with astonishing aesthetic force. I spent several of my in-game days staring at a single work as it gave up its palette to me in silent joy.

These experiences go far beyond what an art museum has an opportunity to provide, and create an entirely new kind of play, what might be called a gallery game. In steadfast opposition to Michael and Auriea’s insistence that their later project, Cathedral in the Clouds is “not a game”, I shall view it as a sequel to Sunset. In so doing, I also hint at an important way that Sunset’s flawed narrative is essential to its function as a gallery game, since it creates the conditions for the ebb and flow of the artworks within the sculpted gallery-space it provides. This, as with Animal Crossing’s every-changing daily content, provided my most powerful reason to return day after day, and may also have dulled my enthusiasm in the latter half of my time playing, as the pieces gradually became boxed up and hidden. I played for just under ten hours in total. It took me seventeen months. Throughout, my experience was always changing, never compulsive, always compelling. Sunset has just what it needs to do what it does best.

Which brings me back to 2005. Although my respect for Façade will never dim, replaying it reminded me of its core problem: it’s frightfully overengineered. Its creators, Michael Mateas and Andrew Stern, called it an ‘AI game’, reflecting their pride in the artificial intelligence dramaturge they had created. I remember the GDC lecture on the design, and it was readily apparent at the time that this was not something anyone else could possibly have any reason to emulate. What’s more, the majority of the player experiences Façade produces could have been generated by a far simpler ‘classical’ narrative design. The genius of Façade was its taking influence from theatre, rather than film or other videogames, and this alone is more than enough to mark it out as a significant turning point for artgames, even if most of my plays of it feel remarkably similar.

Yet 2005 was not a banner year for artistically-motivated games just because of Façade, and among the other remarkable games that debuted that year was Tale of Tales’ first release, The Endless Forest. This unique ‘massively multiplayer screensaver’, which went on to inspire thatgamecompany’s Journey, created an entirely new concept, what might be called encounter games, that allowed players to meet and act out a role with no possibility of harm or competition. It was an idea they followed up with 2012’s Bientôt L’été, with their usual mixed degrees of success.

Sunset, once again, does not succeed on all counts, yet aims so much further beyond anything else I’ve seen attempted in the theatrical artgame genre that it is staggering that it came a mere decade after Façade. That alone would mark it as a phenomenal achievement. That it also contains an entirely original conception of a gallery artgame arguably renders it Tale of Tales magnum opus, and certainly places it far beyond the rather narrow achievements of most artistically-motivated games. Michael and Auriea’s work is not likely to be enjoyed by everyone, and most gamers will find nothing much to their taste in Sunset’s meanderings. Regardless, I find their gallery game to surpass several bricks-and-mortar galleries I’ve visited. I'm not sure I have a higher honour to bestow.

Tale of Tales commented on this piece via Twitter, saying: "Seeing our design ideas talked about in an article about our work sends chills down my spine. It's so rare! So glad you understood and appreciated the importance of the sunset. The narrative was only added for conformity to convention."