One key aspect of Minecraft’s inventory practices is absent from all of the examples previously examined: crafting. Indeed, crafting formed no part of Dungeons & Dragons player practices until the 3rd edition in 2000, and none of the early computer role-playing games descending from it feature this concept. The means of creating magical items that tabletop D&D offered has next to no influence, however. It seems to be Diablo II (2002) that largely establishes the player practice of crafting through the introduction of the Horadric Cube (pictured left), a secondary grid inventory of 3x4 spaces that includes a button to transmute its contents into a new magical item. This provided a means for players to create endgame items beyond waiting for them to drop, and although its function was considered fairly arcane, it was nonetheless a central part of many players’ experiences of this game.

That the crafting box in Minecraft resembles that of the Horadric Cube is not coincidental: Diablo (1996) and Diablo II (2002) were so commercially successful that it is these games (and those of the Elder Scrolls series, discussed below), that anchor the conservation of player practices in Western-style computer role-playing games from this point onward. The Japanese computer RPG lineage, which also traces its heritage back to D&D via The Black Onyx (1984) and Wizardry (1980) before it, would tell a different story, and one that exceeds the scope of this serial to adequately trace. Again, as I pointed out last week, we can tell whatever counter-factual stories we like about the ways things could have gone, but they cannot nullify the influences upon the actual history of games.

A less influential aspect of Diablo II’s crafting practices are items with sockets, which can be fitted with gems in order to power-up the item in question. Like the Horadric Cube, sockets attempt to make the overflowing treasure tables of Diablo something other than a demand to go to the shop and dump the junk. Ernest Adams has joked that computer role-playing games make their players into “itinerant second-hand arms dealers” – the practices added to Diablo II attempt (rather unsuccessfully, as it happens) to offset the root causes of this, and crafting ever since has built upon this idea. The only other major contributor to early crafting practices other than Diablo II appears to be Daggerfall, discussed below.

The original Diablo is one of the games that synthesises influences both from tabletop Dungeons & Dragons, and its computer game inheritors. Co-creators Erich and Max Schaefer had played in the kind of mindless dungeon bash style of D&D that was common (but by no means universal) in the early days of the hobby:

We wanted to do an RPG how we’d played Dungeons & Dragons as kids: hit monsters and gain loot. Our mission was that we wanted the minimum amount of time between when you started the game up to when you were clubbing a skeleton.

Indirect influences came in via the other co-creator, David Breivik, who had played Moria (1975/8) and Angband (1990), two early roguelike games descended ultimately from the unimaginatively titled dnd (1974) on the PLATO educational computer network, written in the same year that tabletop D&D appeared. 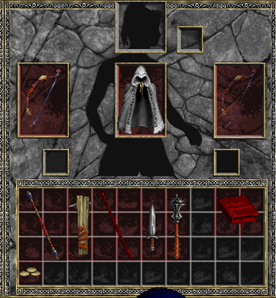 The inventory in Diablo has another key point of influence, however, namely Julian Gollop’s X-Com: UFO Defense (1994), originally entitled UFO: Enemy Unknown. The influence here was in the idea of breaking out of the original grid inventory concept, which allocated one square to an item, by having items take up multiple spaces. As the crop of Diablo’s inventory screen to the right shows, weapons take up between three and six spaces in the grid, in various configurations, an inventory practice established by and descending from X-Com, which all three of the Diablo creators mentioned above point to as their inspiration for the interface design. This thread will be picked up next week. 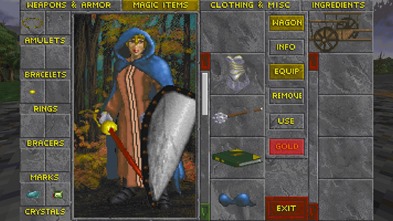 The same year that Diablo was released, Bethesda were working on a follow up to their first Elder Scrolls game, Arena (1994). Just as Condor (later, Blizzard North) had been engaged in player practices from both the tabletop and from computer RPGs, Bethesda’s influences came from both lineages, with Ultima Underworld: The Stygian Abyss (1992) mentioned as informing the design of Arena. But Bethesda were deeply involved with the narrative practices of tabletop role-playing, and were far more interested in role play than the simple kill-and-level rule play that inspired Diablo. Daggerfall marks the point that their influences change from Dungeons & Dragons to later tabletop role-playing systems, particularly Steve Jackson Games’ GURPS (1986).

An interview on Gamespy with designer Ted Peterson (archived in this forum discussion) makes the connection explicit when discussing Daggerfall’s character creation system:

Julian [LeFay] and I had decided to go with a skill-based advancement system rather than Arena’s kill-the-monster-and-advance system, so each of the classes had been assigned different skill sets. Given that, it made sense to allow players to create their own classes assigning their own skills. Then, thinking about GURPS, we added additional bonuses and special abilities and disabilities that the player could assign. I’ve always enjoyed character creation systems in games of all kinds. I don't like playing Gamma World, but even now when I'm bored, I'll sometimes roll the dice and see what kind of mutations my character would develop if I actually wanted to play the game.

The move here is towards the second generation of tabletop role-playing games, like GURPS, with their emphasis on putting the player in charge of character creation and away form dice-rolling practices, like Gamma World (which was TSR’s post-apocalyptic game, using rules very close to D&D). White Wolf’s Vampire: The Masquerade (1991) has also been mentioned as feeding into the world of Daggerfall, with clans of vampires added into Tamriel for this iteration of the Elder Scrolls franchise.

A striking aspect of the inventory screen in Daggerfall is its division into categories like Weapons & Armour, Magic Items, Clothing & Misc, and Ingredients. As noted last week, this was a common aspect of Dungeons & Dragons character sheets, but it hadn’t been used much in computer RPGs. The influence of tabletop practices is also felt in Bethesda’s crafting systems. Arena had a spell creation system that was clearly a modular version of D&D’s fixed-definition spells. Daggerfall, on the other hand, has a more detailed spell and weapon enchantment system, drawing very clearly from the GURPS concepts of Advantages and Disadvantages, that would go on to influence Fallout (1997). 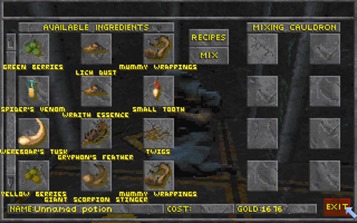 As noted in respect of Diablo, tabletop RPGs hadn’t had a motive to include crafting systems, but the excessive volumes of loot earned in computer RPGs (a product, in part, of much faster paced play) created a need to find other things to do with items other than just sell them. For Daggerfall, the system that most resembles future crafting practices is the Potion Maker, pictured above. Certain items in the game were characterised as Ingredients and could be combined in a Mixing Cauldron, accessed from Temples or the Assassins’ Guild. Mixing could be done freely, or recipes (acquired as treasure drops) could be used to operate the Mixing Cauldron automatically.

Although Daggerfall’s Mixing Cauldron is narrower in scope than Diablo II’s Horaldric Cube, both are initiating the same kind of player practice: one where the inventory is not just a source of equipment for immediate use (as in Dungeons & Dragons), or simply fodder for sale (as in most computer RPGs prior to the 90s), but a set of active elements that can be combined in different patterns to get better equipment. These player practices made no sense at the tabletop, where complex look-up tables would be required. But on the computer, the availability of automation within the game systems kicked off experimentation with crafting as soon as there was sufficient memory space for such luxuries. It was thus the widespread adoption of the CD drive around 1993 that opened the door to crafting practices, which have thrived ever since. 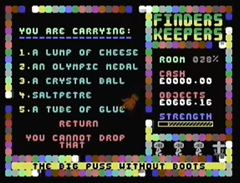 That technological limitations play a role in delaying the onset of crafting can be seen by considering one of the few examples of crafting prior to the 90s: David Jones’ Finder’s Keepers (1985). This budget gem (Mastertronic sold it in the UK for £2, one fifth of the price of most games at that time) had a five slot inventory of the style we have already seen in The Bard’s Tale. The twist was that certain items would automatically react in the player’s inventory to form new items e.g. Bar of Lead and the Philosopher’s Stone would switch to Bar of Gold, while Sulphur, Saltpetre, and Charcoal would produce Gunpowder – used to escape the castle in the ZX Spectrum version, and resulting in the player blowing up (Game Over!) on the Commodore 64. But unlike Diablo and Daggerfall, this game failed to influence even its own sequels, which never again experimented with crafting. The 8-bit era does, however, have an important part of the story of game inventories, which we will turn to next week.

Next week: Resident Evil 4 and X-Com

Didn't Ultima IV have a crafting system? I remember you had to mix reagents in order to cast spells. You'd prepare them (and then they were part of your inventory) and you could cast them later.

That was also in 1985, so there are other precedents, and as established here, the Ultima games feed directly into the Elder Scrolls series as influences.