The ridiculously over-titled Tales of the Unknown, Volume 1: The Bard’s Tale, was released in 1985, two years before Dungeon Master, which as shown last week innovates the grid inventory practice that persists all the way to the present day. It’s a measure of the influence of The Bard’s Tale (as it came to be known) that the sequel drops the Tales of the Unknown branding and goes for The Bard’s Tale II: The Destiny Knight (1986). It ultimately goes on to complete a trilogy of games that are fondly remembered, despite not ranging very far from the practices that SirTech’s Wizardry: Proving Grounds of the Mad Overlord (1980) established five years earlier in adapting tabletop Dungeons & Dragons (D&D) to the computer.

As the screenshot above shows, each character in the party is allowed eight items in their inventory. The ordering of the items makes no difference, and the distinction between equipped items and unequipped items is marked with an asterisk. The Warrior shown in this picture has a shield, various items of armour, and a halberd to attack with. His appearance in the display window in the top left is utterly unaffected by what is equipped, but unlike Wizardry the images of both party members and monsters that appear in this corner are pleasingly animated, which added to the appeal at the time of its release.

There is one difference between Wizardry’s inventory and that in The Bard’s Tale: the former used a question mark to indicate items that had not been identified, a player practice invented by D&D but largely maintained only in Rogue (1980) and its descendants. The Bard’s Tale eliminates this practice for simplicity, and indeed can be seen as a refinement of its immediate predecessor, Wizardry, knocking out all manner of clunky elements that had either been inherited from its tabletop forebear (like identifying magical items) or thrown in for good measure (such as adding attribute points on top of random base values during character generation).

The true extent of the conservation of player practices between Wizardry and The Bard’s Tale can be felt with the latter’s sequel, The Destiny Knight, which allowed players to import their party of characters not only from The Bard’s Tale but also from Wizardry or Ultima III (1983). This was possible because the player practices that all three games were built upon were all intimately tied to D&D. Wizardry’s attributes of Strength, IQ, Piety, Vitality, Agility, and Luck become Strength, IQ, Constitution, Dexterity and Luck in The Bard’s Tale. It thus reverted Vitality and Agility to D&D’s terms Constitution and Dexterity, maintained Strength (also from D&D), kept Intelligence as IQ, and dropped Wizardry’s Piety, which had been renamed from D&D’s Wisdom. The only thing new in the computer games is Luck, which replaces D&D’s Charisma, since early computer RPGs struggled to implement any kind of character interaction, and The Bard’s Tale takes this attribute directly from Wizardry.

It will thus come as no surprise that Michael Cranford, the game designer and programmer at Interplay who was responsible for almost every aspect of The Bard’s Tale except its art, was not only playing Dungeons & Dragons at the tabletop (frequently as Dungeon Master,)but also playing a great deal of Wizardry. Like the team at FTL responsible for Dungeon Master two years later, Cranford wanted to create a ‘Wizardry Killer’, and with The Bard’s Tale achieved a streamlined perfection of the player practices of that earlier game, as well as bringing in a few of the new player practices TSR had added in Advanced Dungeons & Dragons, such as changing classes – which is precisely where the Bard character class had come from in the first place. 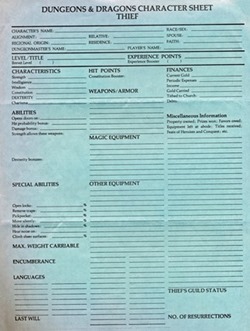 It is hopefully clear at this point that for almost twenty years after its original release, TSR’s Dungeons & Dragons was the wellspring from which the player practices of computer role-playing games were established. D&D had many influences from the tabletop scene preceding it, not least of which the wargames of Charles S. Robert’s Avalon Hill, but the sheer degree to which the D&D rules were distributed throughout the US (primarily via college players) – both by purchase and through unlicensed copies – made this the definitive version of tabletop role-playing games player practices that were conserved by the computer variants.

The tabletop successors of D&D become a part of the story only a decade or so later, e.g. Steve Jackson Games’ GURPS (1986), which gives rise to Interplay’s later Fallout (1997). All the way through the 70s and 80s, D&D was feeding its player practices directly or indirectly into computer games. This is particularly clear in terms of the First Person Shooter lineage. As noted last week, the original controls of id software’s games were inherited from the cursor key movement of The Bard’s Tale and Wizardry, not to mention that the developer were avid players of D&D itself, with one campaign specifically inspiring DOOM (1993). Furthermore, the open world genre equally ties back to Dungeons & Dragons via Traveller (1977) and Space Opera (1980), two early tabletop RPGs that were beloved by David Braben and Ian Bell, whose Elite (1984) would be a major influence on Grand Theft Auto (1997).

In terms of inventories, Dungeons & Dragons effectively invents them (although not the name...) or rather, acquires this practice from early non-commercial tabletop role-playing games, and then becomes the locus of the conservation of player practices by being so widely distributed. The core element of the inventory practices is the use of a set for representation instead of mere function. Sets had enjoyed a millennia of productive use in board and tile games before Dungeons & Dragons used them to create a revolutionary new player practice: the character sheet. In collecting together all manner of fields (Name, Class, Attributes, Alignment and so forth) into one set of sets (a superset), D&D was creating a means of representing entities that would be picked up by early videogames and gradually explored over the decades that followed.

Within the superset of data that was the written character sheet, the inventory was nothing more or less than a written list, recording a subset of all of the possible items specified by the written rules. The original white box game of 1974 did not have a pre-designed character sheet, and players recorded all the text and numbers required to specify their characters without any established format. However, there was soon a thriving experimentation in home-printed character sheets, like the one depicted above that was created by Bob Rupport in 1975. 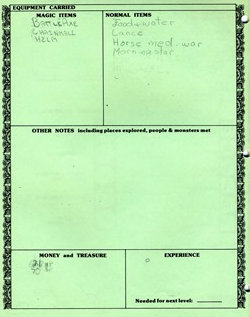 Many other variations followed until TSR established an official printed character record sheet in 1977, a 1980 variation of which appears to the right. In fact, as both these examples attest, the early tabletop RPG inventory was quite frequently multiple written lists: Rupport’s version divides the inventory into sections named Weapons/Armour, Magic Equipment, and Other Equipment, while TSR’s official version provides separate boxes for Magic Items and Normal Items, stressing the importance of Magic Items (acquired as treasure) to character advancement, both in the tabletop game and in its immediate successors. At heart, this choice to list items in two separate sets had no representative force, and it is hardly surprising that Wizardry and The Bard’s Tale didn’t bother to make the distinction. They also limited the size of the list to eight items (the paper sheets having no such limitation) as a practical matter tied to the keyboard: number keys could be used easily to select which item was to be used.

The tremendous influence of Dungeons & Dragons, in terms of the use of sets for representation (inventories, character sheets), character progression (experience points, levels), and codifying game worlds (dungeon, village, wilderness) may inevitably invite the retort: if it had not been D&D, it would have been something else. However, this counter-factual argument is not as important as it feels to game designers as they try to shrug off their debts to their direct influences. The 1980 release of Wander (a rival for the first text adventure, but nowhere near as influential as D&D-descended Colossal Cave Adventure) has an inventory command listing the items you are carrying; perhaps this was also in the original 1974 release. But game design ideas do not exist in a Platonic void, where the are magically plucked from. Game designers are players, and they are embedded in the player practices of the games they play. Once this is accepted, the legacy of Dungeons & Dragons is unavoidable and undeniable, and it comes into focus as the most influential game ever published.

Next week: Diablo and Daggerfall