Home Archives Profile Subscribe
The Best Thing About the Cover for Wikipedia Knows Nothing...
Fresh Lick of Paint 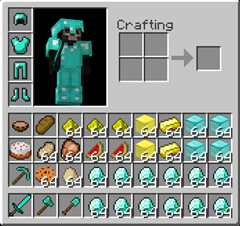 Look at this screenshot from 2009’s Minecraft, one of the most successful games to be built upon the player practices of the role-playing game lineages. What can immediately be seen are a set of armour slots and an image of how they look upon the character, a crafting area, a grid inventory, and a quickbar. There is nothing new in this design, and neither should there be; Minecraft’s innovations are primarily in its customisable regimes of play, not in its interface. What I want to draw attention to here is the way that every single element of Minecraft’s inventory descends directly from a lineage of videogames rooted at its base in the original tabletop role-playing game (RPG), Dungeons & Dragons in 1974. Even its ‘mouselook’ control scheme, which originates in the First Person Shooter (FPS) lineage, has its roots in the RPG lineage.

This serial takes pairs of games in key lineages that descend from Dungeons & Dragons (D&D), either looking at the relationship between a newer game’s design and an older game that developed or popularised the interface practice being examined, or otherwise drawing historical parallels. This first piece looks at the grid inventory of Minecraft and shows how this originates with 1987’s Dungeon Master, itself a direct descendant of D&D. Future pieces cover all the other elements we see here in Minecraft, as well as a few other aspects of inventory practices in games. Alongside this retrospective analysis I will also be espousing a different philosophy for understanding and practicing game design, one that I have been writing and presenting about more or less since I finished writing Imaginary Games. This perspective is focussed upon continuities in the practices of players, which become in turn the practices that inform game designers, who pass those practices onto new players.

The prevailing tendency when examining the design of games is to break down the functional elements of the design as mere atomic entities that can be freely combined. This is how most game designers, myself included, think about the game design process – as selecting options from an imaginary bag of game design elements. Despite its efficacy, my claim here is that this model risks utterly misunderstanding the importance of both history and practice for game design, and only works because the game designer is so deeply embedded in the existing player practices that they knowingly or unknowingly reproduce them. In contrast to the ‘atomic theory’ of game design, I advocate understanding how the conservation of player practices (which are highly variable in commercially unsuccessful games, but not in successful ones) is in itself the key to successful game design.

Understanding games and game design in this way does not entail any dramatic sea change to the way games are made, it only involves foregrounding what is commonly just dismissed: that games are connected by historical lineages that are sustained by common player practices, which is to say, things the player learns to do consistently. The game designer, as a player themselves, recreates the player practices they have learned from other games. When a game designer thinks they are pulling together isolatable atomic elements of a game design, they are simply ignoring the practices those elements belong to. But success at game design is attained most effectively by understanding how player practices function. As I’ve argued before, the tremendous success of Minecraft was not just down to its original elements, which were small but significant. It was largely down to the way that it leveraged well-established player practices. 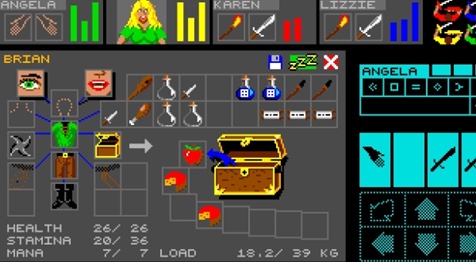 The grid inventory, so prominent in Minecraft and the backbone of game inventories for nearly thirty years now, is part of a series of player practices that owe their origins to the influential Dungeon Master, by FTL. This remarkable game came about through the co-operation of two designers who were intimately embedded in the player practices of tabletop role-playing games and their early computer descendants – Doug Bell and Andy Jaros. SirTech’s Wizardry had been their direct inspiration; they wanted to make a dungeon crawl in that vein, and set to work on what was then called Crystal Dragon. However, they didn’t have the funds to complete the project alone.

Six letters to software companies in the Los Angeles and San Diego area eventually hooked them up with Wayne Holder, husband of fantasy and horror novelist Nancy Holder. The combination of a pair of designers rooted in the player practices of role playing games, a professional writer, and a business-savvy company owner was to prove immensely productive. Bell and Jaros, like most game designers, enacted the conservation of player practices in their work, but were repeatedly challenged by the Holders to push past the usual assumptions. In particular, Nancy Holder was responsible for contributing one of the first – and greatest – plot twists in any videogame ever written, and Wayne Holder’s outsider perspective on role-playing helped remake the menu systems of the game to bring them up to the standards then coming together in Graphical User Interfaces at the dawn of the WIMP era (Windows Icons Mice Pointers).

The core vision that guided the project was giving the player a powerful sense of immersive presence. Jimmy Maher, in an outstanding summary of the circumstances behind the game, characterises their goal as “an embodied CRPG experience”, and quotes Nancy Holder as asking: “How do you go from being a player to being ‘in’ a game?” Thus the agency practices of Dungeon Master involved breaking down the sense of separation between the world and the character sheet that earlier games in this lineage had inherited from Dungeons & Dragons. In Dungeon Master (itself obviously named in reference to its tabletop progenitor), the player can find a sword on the floor of the rendered three dimensional dungeon, move their pointer (styled as a hand) and grasp it, delivering it into inventory slots in the grid inventory (Wayne Holder’s WIMP-inspired innovation) or into the ‘paper doll’ slots representing each character’s personal equipment. The widespread deployment of both these practices descend from this game, and they are massively conserved from this point – just compare the screenshot of Minecraft with that of Dungeon Master’s inventory: the key difference is that Minecraft’s is notably more shoddy in terms of presentation values.

In setting out to evoke real-time immersive presence, and thus ending the turn-based practices that were both a natural consequence of tabletop practices and a pragmatic option for early computer hardware, Dungeon Master in effect sets up both the shape of forthcoming computer RPGs and heralds the imminent arrival of the First Person Shooter (FPS). Such games are called ‘first person’ in contrast to the arcade shooter, or shoot ‘em up, which was not rendered in 3D, but as a ‘flat’ 2D space. Yet all the dungeon crawl games were in 3D yet did not acquire the appellation ‘first person’. What this term attempts to capture is the very sense of immersive presence that Dungeon Master pioneered; that’s what ‘first person’ is intended to describe. In Maher’s retrospective, he describes this game as “just as obviously a progenitor of Doom as it is a successor to Wizardry.”

Here, we run up against the vagaries of historical research, since while id Software admit to being influenced by dungeon crawl games, no-one will name which. If Dungeon Master were one of them, it would arguably make it the second most influential game after D&D, having set up both the later Western RPG lineage and the FPS lineage. It’s hard to solve this mystery. That Wolfenstein 3D and Doom were both built upon the player practices of computer RPGs is apparent from their interface practices using cursor keys for navigation ('mouselook' emerging only later in Quake, and even then only as an option). But The Bard's Tale (which we’ll look at next week) is an equally plausible point of influence, and there’s a certain sense in which John Carmack’s confidence in the innovation of his first person engine undermines the idea that Dungeon Master was his muse. In an interview for the New York Times he remarked in respect of the sense of fear that the immersive presence of Catacomb 3-D evoked that it was “a reaction that we’d never seen in any other form of video-gaming.” He could not have reasonably have thought that if he’d played Dungeon Master.

Next week: The Bard's Tale and Dungeons & Dragons