This is a copy of the email I just sent to the Official Charts Company, whose contact details can be found here. 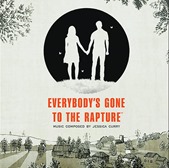 Dear Chris and Lucy at the Official Charts Company,

It has come to my attention that Jessica Curry's classical score to the digital game "Everybody's Gone to the Rapture" has been removed from the UK Classical Artist Album Charts, after having previously been an excellent performer in this category. Right now, thousands of enraged videogame fans are boiling with fury on the internet about this, and the knee jerk reaction has been that she has been removed because her soundtrack appears in a digital game.

If this allegation were true, it would be a tremendous act of disrespect to both musicians as a whole, and to games as an artistic medium.

I am hopeful this is not the case, but I urgently request a clarification as to the reason for the declassification of this album from your charts. Examining your Eligibility Rules suggests that, since Jessica has clearly composed in a classical form (rules 3 and 6) and is capable of live performance (rule 5), it should qualify.

However, I am uncertain of the intended meaning of rule 9, which states "Original soundtracks and scores performed in a classical style, by either a single artist or various artists, will not be eligible for the Classical Artist Album Chart." Nonetheless, since "The Complete Harry Potter Film Music" appears at Number 29 in your chart, it would seem that there is no prima facie reason that Jessica's soundtrack should not qualify.

I would be grateful for a swift clarification on this matter.

I have worked for many years to secure the case for games qualifying as artworks, a situation that has now become unimpeachable in terms of the philosophical arguments. We still, however, face tremendous prejudice from the media establishment. I hope and trust that the Official Charts Company is not part of the ongoing bigotry against games as an artistic medium.

Hi Chris
I am out of the office so apologies for the brevity of my response
Both the Jessica Curry release and the Harry Potter album you refer to appeared in the Classical Artist Album Chart in error. As you rightly note, soundtracks are not eligible for this particular chart, and we treat movie and game soundtracks in the same way.
The Classic FM Chart is compiled by ‎the Official Charts Company and includes Classical Artist Albums, Compilation Albums and Soundtracks. Everybody's Gone To Rapture OST appears in this chart at #7 I believe, so we completely agree that this is a classical body of work and included it as such
We produce the Official Soundtrack Chart each week and both of these albums are of course eligible for this chart also
‎Please do not hesitate to contact me if you have any further questions, or would like any further detail
Many thanks
Chris