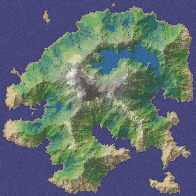 It occurred to me this morning that my undergraduate thesis on landscape creation through fractal noise synthesis and language generation through morpho-phoneme systems was in 1994. I would have done a game-focussed Masters degree if any member of the faculty had understood why I was working in that field, but as it was I had to teach a robot to read instead. But this publication date – 1994 – puts me into the ‘first wave’ of game studies scholars. In fact, for a brief moment I thought it made me the original game studies scholar. But let’s not get carried away.

“First wave” makes much more sense to describe game studies scholars than feminists, don't you think? It gets you all worked up about wanting to beat the final wave! But when exactly would you judge the first wave of game studies?

Taking my 1994 publication as a benchmark, let’s take on the usual contenders.

Bartle? Didn’t get a paper out until 1999. Sorry, King of MUDs, you’ll just have to settle for being the iconic co-founder of one of the most influential game formats of all time instead.

But then, just as I’m flush with these easy victories, along comes James Wallis with a grenade in his quiver. Because from 1994-5 he published the incredible journal Interactive Fantasy, which as well as being an awesome publication is famous for hosting Greg Costikyan’s incredible essay “I Have No Words and I Must Design”. And he also points out that Chris Crawford was publishing the Journal of Computer Game Design from 1987-1996. Respect, Chris. I yield the hill to thee.

Of course, it all comes down to what we mean by ‘game studies’. What Juul and Aarseth can lay claim to was carving off a niche for the study of games that wasn’t the ridiculously narrow field of game theory (really: mathematics of competition). I didn’t do that. I went into industry and made commercial videogames instead. To these two, and others in this ‘first wave’ of game studies scholars, all who study games owe a debt.

Those who came before this – like Thomas Malone and Chris Crawford (and Richard Bartle too, since I conveniently overlooked his 1985 book...) – are the zeroth wave, the people studying games before there even was a game studies field. And before them, of course, the legendary sociologist Roger Callois and heroic historian Johan Huizinga. I would add to this Ernst Gombrich: if Imaginary Games achieves anything, I hope it is to show how Gombrich completes this holy trinity of the progenitors of game studies.

So, no crown for me, no victory, no honour. Except the honour of being part of this grand tradition of thinkers who claimed that games and play are worthy of study. And in this, I salute each and all who came before, or who follow after.

The opening image isn’t one of my maps from my thesis project (I can’t find any GIFs from this era of my life) but from a graph structure constraint noise synthesis project by Amit Patel that is orders of magnitude superior to my basic height map technique (even taking into account that he doesn’t have my language-module for naming settlements in a procedural language). You can learn about Amit’s fascinating project on his Red Blog Games blog.