The Essence of RPGs (2): Rule-play 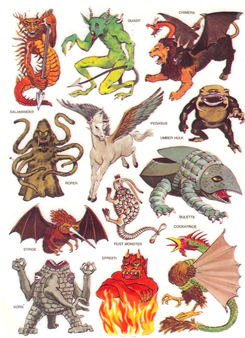 In the previous part, I staked my claim for a new understanding of role-playing games as nothing more nor less than the children of TSR’s seminal Dungeons & Dragons. This sounds trivial: but that’s only because it’s easy to underestimate the earth-shattering effect of D&D upon player practices, and the sheer impact it possesses through its demonstrable influence. This was not just upon tabletop game designers but also videogame designers, whose player practices (and hence design practices) descend directly from the programmer-designers of the 70s and 80s, all of whom were conditioned by the ubiquitous presence of tabletop RPGs in the gaming culture of the time. Next week, I’ll explore the concept of a role to be played that was also essential to the role-playing game concept, but first I want to explain why the rules of D&D remade our understanding of games in their entirety, in ways that now dominate commercial videogames even today.

Boardgames had been on the rise from the moment the industrial revolution made the means of mass production available. This wasn’t surprising, as humans had been enjoying games for millennia, but the games were necessarily either simple or narrowly distributed, because of the cost of hand-making all components. The late Victorian era saw an explosion of games with colourful titles like The Game of the District Messenger Boy (1886), although their components were all quite simple. In the twentieth century, games became more and more representative as the means of production allowed for more elaborate components, a trend exemplified by Cluedo or Clue (1949), which adds a map that is not just a track or a grid but clearly the layout of a fictional mansion. For the nerds of the late 50s and 60s, however, family boardgames such as these had become irrelevant, because Charles Robert’s Avalon Hill was finally on the scene, making a dizzying array of historical wargames, with rules defining player practices that are still being used in turn-based strategy games today.

It was into a landscape of player practices defined by Avalon Hill (and, by the 1970s, it’s me-too competitors) that Gary Gygax and Jeff Perren released Chainmail (1971). It was revolutionary precisely because it wasn’t historical: its influences were fantasy novels of the kinds made popular by Robert Howard, Fritz Leiber, and Michael Moorcock, not to mention J.R.R. Tolkien. But because it wasn’t historical, it also shifted the focus of its player practices significantly as well. All Avalon Hill games were about being in command of an army of some kind or another. What Chainmail invented (or rather codified, since it was inspired by various fan rulesets in circulation), was a switch in focus from armies to heroes. With this, the rules naturally changed to express different parameters and to measure different concerns – hence the appearance of magic spells and monsters, and more importantly levels.

With Dungeons & Dragons, which was initially presented as a variant of Chainmail, Gygax and Dave Arneson refined the level concept to encompass another key player practice in gaming today, that of experience points. In D&D, players picked a character class (just Fighting-man, Magic-user, and Cleric in the first edition!) and then advanced their character through levels via the acquisition of XP, gaining in power as they did so. It is a player practice so ubiquitous in gaming today, that it is difficult to truly appreciate that it originates almost entirely with D&D. Prior to D&D, gaming as a hobby was about tactical simulations of clashes between essentially anonymous armies, for which any concept of advancement was irrelevant. That ceased to the be case as soon as the template for the fictional world was not a historical battle but a quest narrative. The ultimate consequence of D&D’s very simple mechanics was a gradual intensification of advancement mechanics and their associated player practices (such as grinding), until – via the viral explosion of so-called ‘social’ games, and the more overtly D&D-descended World of Warcraft – these practices had become the foundation of billion dollar economic behemoths, worlds apart from the face-to-face tabletop play where it had spawned.

‘Rule-play’ is in essence a focus upon character advancement. This might go to the extremes of ‘min-maxing’ (making decisions solely for the purpose of maximizing benefit) or it might be a more subtle focus upon the pleasures of gaining new powers and capabilities. Indeed, Dungeons & Dragons created a near-infinite array of things to acquire! It is this breadth of options that underpins rule-play, and that can make a game fit the descriptor ‘role-playing game’ even when the elements of role-play are slender. What distinguished tabletop role-playing games as systems from the games that existed prior to Dungeons & Dragons (if we ignore the player practices, and hence what the game actually consists of in play) was the presence of a complex ontology. This philosophical term ‘ontology’ refers to the study of being, but it has acquired a sense in information technology of cataloguing and classifying what exists. In role-playing games that serve rule-play well, what exists is a great many things!

In early arcade games, the variety of entities was low because of technical constraints – Pac-man generates its engaging play from just seven entities, not counting the individual mazes. With the Avalon Hill wargames, the ontologies were basically lists of units and lists of terrain – many more things than possible in the (later) arcade, and also more than in family boardgames, because the players were capable of dealing with more complex systems and thus more intricate player practices. A fully delineated ontology for, say, Monopoly, might rack up many entities by treating each different card as a separate entity, but even this would not reach the degree of complexity that Dungeons & Dragons opened the door to. Firstly, there is the range of possible player characters that can be constructed from (fictional) ontological elements such as class and race, not to mention the variety of specific entities implied by different combinations of attributes (Strength, Dexterity, Constitution, Intelligence, Wisdom, and Charisma). These are further diversified by the varieties of equipment – both that which can be purchased in a shop, and that which can be acquired as treasure from ever-more-detailed tables. And this is all before the adventurers have left the tavern! Once out in the world, there are varieties of monster (all equally diversified by their attributes), of terrain, even of alternative dimensions. The fictional world of a typical role-playing game is always diversely populated.

The sign of the relevance of ontological complexity to role-playing games was TSR’s decision in 1977 to pursue a two-pronged strategy, dividing the game between the comparative simplicity of ‘basic’ D&D and the extraordinary complexity of Advanced Dungeons & Dragons, with its large (and expensive!) hardback rulebooks. Again, rule-play is an appropriate name: players whose interest lay with narrative play did not need five hundred pages of lists and tables to fulfill their play needs! But rule-players did – they craved more details, more tables for simulating very specific situations (even if they never actually used them), bigger treasure tables, more monsters, more equipment, more, more, more! This is the essential quality that computer role-playing games inherited from the tabletop: with the limitations of a computer, the role-play dimension could only be crudely replicated, but the ontological complexity was perfectly suited to computerisation, albeit requiring the work of many artists to create the entities’ appearances (and even more now that games are routinely delivered in polygonal 3D). Ontological complexity begets player choice, and for many players that dimension of agency is irresistible.

What is worth noting about the design of Dungeons & Dragons is the way it created an opening for player practices that engaged with worlds of such enumerated detail. Prior to D&D, the entities were all formally specified by the rules with the only wiggle room coming from house rules (which were common, but generally did not add much to the ontological complexity). With D&D, the concept of a character sheet changed the landscape of play forever by creating a component of play that was filled in by hand, and thus that could be completed in any way the player imagined (provided the games master – or dungeon master, in D&D’s case – agreed). No need for a token or card to represent every piece of equipment, you just write what your character carries into the relevant box. Want to make your elven bard stand out from the crowd? Just write a unique description onto your character sheet! It is the character sheet that opened up player practices towards infinite imagination and away from prescriptive rules systems, and from this simple conceptual liberation the possibilities of both rule-play and role-play emerged.

Next week, the final part: Role-play

I'm always surprised by little open recognition there is of D&D's influence on game design. To be fair, I think that it's starting to change/dwindle as new generations of designers appear... also, there's been little academic work on the subject.

Hi Jose,
Great to get a comment by you, and especially to hear you say precisely what I was thinking - and what motivated me to write *yet another* piece on the relevance of Dungeons & Dragons to videogame history.

I thought I'd made this link pretty definitively in "Imaginary Games". (Of course, not that many people read it...!) Far too many people seem to think that videogames come from the arcade and nowhere else: that's a great shame, and a massive distortion of the lineages by which contemporary games came to be.

I don't agree about the dwindling influence, though, or at least I agree with qualifications: as this serial attempts to argue, the player practices originating at the tabletop persist - it is not entirely salient to this question that people now learn them from other games. :)

As for little academic work - yes, there seems to be just me. :D

Looking forward to seeing you next week!