The Essence of RPGs (1): Children of TSR 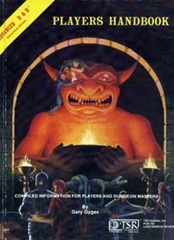 Near the beginning of my career as a game designer, one of my first speaking gigs was at an event in London where I was scheduled to appear with Warren Spector. Unfortunately, Warren was attending via webcam and the conference organisers took so long to set him up that my hour presentation on non-linear storytelling in games had to be condensed to ten minutes. By way of apology, Warren and I had a good exchange of emails where we discussed, amongst other things, some of the issues that Deus Ex faced during its troubled development. One thing in particular stuck with me. From the beginning of the design process, it was agreed that Deus Ex was going to be a role-playing game (RPG) – yet the many designers working on the project did not agree what an RPG was.

One of the strangest points of contention was that if you didn’t get to create the name of your character, it wasn’t an RPG. I found this particular odd because it was quite common in tabletop RPGs (especially at conventions) to be given a pre-generated character to play, and no-one thought this meant you were no longer playing an RPG! But it highlighted the enormous range of opinions as to what the essence of an RPG was, a situation that is no different now, a decade and a half later.

The problem with approaching the question of what constitutes an RPG by definitions is that these are always a post-hoc solution to the question of language. We do not in general learn words from declarative definitions because we are not programmable robots. We learn words through examples. This surely is why some of Warren’s team were fixated on the ability to name a character as a defining character of RPGs: it was a common trait of the games that they had previously played which had identified as role-playing games.

The philosopher Wittgenstein recognized in the early twentieth century that some words are particularly ill-suited to rigid definitions because they collect together many diverse entities. He gave ‘game’ as a specific example of what he termed family resemblance, because no single definition can adequately collect together everything to which this term is applied. It is for this reason that we fight so much (and so fruitlessly) about the definition of ‘game’, an issue that I eventually turned into a productive investigation of implicit aesthetic values that was ultimately published in the journal Games and Culture. The problems with the definition of ‘role-playing game’ are an extension to this more general issue, and similarly rest upon the sheer diversity of things that can lay claim to being RPGs. Creating a static definition, while occasionally useful, will not solve the disputes. What is needed is a way of understanding the family resemblance of these play activities.

In my parallel career as an academic, I try to give all the new students a grounding in the history of games, one that goes back four millennia and shows that games are related to one-another by ties of loose inheritances that form what I term lineages. For any given game, its lineage is a network of games (and other artworks) that contribute to the inherent qualities of that game. It is akin to inheritance in biology, except games exchange their constituent elements in a manner more akin to bacteria than to mammals i.e. through a free exchange of their constituent elements, leading to the impossibility of identifying any strict concepts of genus and species for games. What’s more, these relationships aren’t best understood in terms of material factors.

While it may be tempting to try to relate games by their design elements, this is an abstraction of what can be observed being passed on between games: player practices. Whereas sports are founded upon the principle of conserving such practices over time, most games thrive on experimenting with new combinations of player practices, either by baking them into the artefact by design, or by supporting the creation of new player practices within the accompanying fictional world. Whichever way you look at it, we can’t just treat a game as a sterile material object: an artefactual reading is always an incomplete reading.

One of the striking things about analysing games by their lineage is that when we are talking about videogames there is one particular game that appears in the lineage of the vast majority of all digital titles: TSR’s Dungeons and Dragons. This is because, as I wrote about at length in Imaginary Games, the original tabletop role-playing game from 1974 was innovative in multiple different ways, many of which are now part of the core player practices of videogames – even games whose designers never played a tabletop RPG!

Some of these innovations are part of the lineage of genre fiction: the idea of a game world that is a hodge-podge of elements from different fantasy novels and mythologies was pushed into overdrive with D&D. From its roots in fantasists such as J.R.R. Tolkien and Michael Moorcock, who had used specific mythologies as source materials for fantasy worlds, the designers at Tactical Studies Rules began drawing from every mythology as a source for a single world – a practice now shockingly common in all published media, as witnessed in ‘urban fantasy’ or film franchises such as Shrek. However, some of the other inventive ideas found in this game were new player practices devised and developed by Gary Gygax, Dave Arneson, and Jeff Perren (who produced Chainmail with Gygax in 1971, and from which D&D directly descends).

The lineage approach to understanding the history and analysis of games affords an exceptionally useful solution to the problem of determining what constitutes an RPG, albeit by sidestepping the fool’s errand of a static definition. Player practices can be tracked confidently wherever explicit influences have been mentioned in interviews and the like, and can be tentatively attributed in many other cases. All role-playing games have in common the presence of Dungeons & Dragons in their lineage – indeed, at the root of their lineage. Of course, as already mentioned, the class of games this is true for is vast, far beyond the way the term would usually be used. Grand Theft Auto (1997) was inspired by Elite (1984), which was inspired by Traveller (1977) and Space Opera (1980), two tabletop RPGs directly descended from D&D itself. Should all GTA games be considered RPGs, then? I would happily support someone bullish enough to say so, but I don’t need to make so strong a claim here.

The litmus test I propose in order for a game to be called a role-playing game is that its player practices either entail the essential aspects of Dungeons & Dragons, or another game that directly descends from it (i.e. that has inherited a significant proportion of player practices from games that do the same from D&D). Final Fantasy (1987) was inspired by Dragon Quest (1986), itself inspired by The Black Onyx (1984), which Henk Rogers took to Japan after being a fanatical Dungeons & Dragons player at university in Hawaii (and also from Ultima, which similarly descends directly from D&D). The games that players use as personal type cases to make an individual judgement as to what is or is not an RPG are all (necessarily) games whose lineage tracks back to D&D via player practices that have remained closely related throughout.

In this short serial, I want to examine the essence of role-playing games as two diverging lineages. Because lineages are only cross-sections of networks of player practices, there are always many other ways that this subject could be explored, but for the purposes of both understanding RPGs, and thinking creatively about how to make new ones, the division that I will be making is perhaps the most productive – particularly as it neatly splits up the two rival camps most likely to disagree in arguments over definitions of ‘role-playing game’. As was my thesis from Implicit Game Aesthetics, such disagreements are always evidence of aesthetic values (which may also relate to Bruno Latour’s recent claim that we can identify different ways of being in the world by looking at the language clashes between them).

I shall save until last the essential quality that I most value about role-playing games, which is their flexibility as powerful tools for narrative play, for which I shall reserve the term role-play. We call them ‘role-playing games’ precisely because they entail taking on an imaginary identity – a player practice now endemic within videogames, in part because programmers working on games in the 1970s and 80s were all either playing tabletop RPGs or knew people who did. But the innovative design of Dungeons & Dragons was only partly about taking upon a role within a fictional world, even though without this breakthrough none of the other aspects of its play makes any sense. Before we can properly understand role-play, we have to first understand “rule-play”, a derogatory term that narrative-valuing RPG players assign to those others who are not focussed upon RPGs as a storytelling media. And rule-play can describe the other essential elements of role-playing games perfectly.