The Politeness of Tutorials 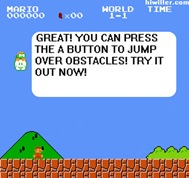 The question of tutorials is one that has haunted my career as a game designer, and if it has not tortured others it can only be because they have failed to notice how devilishly difficult it is to construct an adequate tutorial that can balance all the competing needs of players when facing a new game. In your reply to my piece The Aesthetic Flaws of Games, you identify (as it says in your title) Tutorialization as an Aesthetic Flaw in Games, which is to say, you describe an aesthetic problem that occurs when a game works too diligently to explain itself, since this in itself can lead to player frustration. This is what you have termed ‘tutorialization’.

The challenge in creating an adequate tutorial is the complete absence of knowledge we possess of the actual people who will be learning to play our game. Pitch the level of detail too low, and there will be players confused by what is expected of them. Provide too much detail and those players who are skilled in figuring things out will be irritated. I have come to think of tutorial design as the Hard Problem of Game Design, in reference to the so-called ‘hard problem of consciousness’ (which as it happens, is not anywhere near as hard as it seems!). What is particularly bemusing about creating tutorials is that if you watch a player learn to play a game from over their shoulder, you might not need to say more than a sentence or two in order to put them on the right track. But this is because we have the intelligence to interpret the problems a player encounters and provide appropriate guidance: there is no adequate way to transfer this skill to a computer!

I want to illustrate the impossibility of a perfect tutorial by comparing the general approach of the Japanese game tutorial to a generalised archetype of a Western tutorial. The key difference between the two methods is their politeness – but by this, I do not mean that one approach is more polite and the other less. Rather, each represents a different ideal of politeness.

For the game designer producing a Japanese-style tutorial, a number of assumptions are in play. Firstly, if there is information being provided, it must not be possible to miss it i.e. it would be impolite to design a tutorial that could be skipped by accident, as this might mean a player is not properly briefed on the game. Secondly, each and every person who comes to the game, irrespective of their age, should be able to grasp the fundamentals of play from the content of the tutorial. These assumptions lead to a tutorial that is fastidious in describing how to play the game, that presents its information clearly in ways that cannot be skipped, and thus has the maximum chance of ensuring that everyone who starts the tutorial finishes knowing how to play. The ideal of politeness here could be summarised as “every player adequately briefed.” To fail even one player would be impolite.

Now the archetype of the Western-style tutorial draws against a different conception of what would be polite, specifically that to waste the player’s time would be rude. Therefore this kind of tutorial places an emphasis upon allowing the player to skip over those areas that they do not require instruction in. It is assumed here that skipping a step in the tutorial is not something that would happen by accident (and if that happens, it is the player’s fault anyway). This leads to a tutorial that attempts to minimize the total amount of time players spend within it i.e. that aims to be the most efficient at delivering necessary instruction. The ideal of politeness here could be characterised as “try not to waste the player’s time". To lecture the player in something they already understand would be impolite.

Obviously, not all tutorials made in Japan fit the Japanese archetype, and certainly not all Western games fit the alternative model, but the general patterns are illuminating. The Japanese ideal of politeness is rooted in the collectivist morality of that culture whereby individuals ought to accept limitation for the benefit of everyone. The Western ideal of politeness draws against Enlightenment individualism whereby each person is expected to take responsibility for themselves. The two ideals are incompatible. You simply cannot create a tutorial that will ensure all players are adequately briefed and that will not waste any player's time.

The illustrative example is that according to the individualist ethics, if you skip information that you needed that’s your fault; in the collectivist ethics, if you skipped information you needed, that’s our fault – therefore, we should make certain you do not do this. The individualist complaint at being constrained by the tutorial – which is a part of what you mark by tutorialization – has as its complement the collectivist complaint that some players did not adequately understand what to do. As I hope is clear, to provide a degree of instruction suitable for anyone necessarily involves an experience of tutorialization for some proportion of players. Thus tutorial design always risks either tutorialization or perplexity (my term for a mismatch between expected skills and actual player practices). This is not a soluble problem. You simply have to choose which kind of failure is more acceptable: that any player might be impatiently frustrated, or that any player might not know how to play.

Now as it happens, the kind of frustration that tutorialization draws attention to tends to be problematic in just those players who possess what I term confusion endurance. Such players are undaunted by puzzles because they actively enjoy working out solutions, and indeed, players fitting this archetype (called Mastermind in BrainHex), are more likely to complain about being told what to do than to moan about being provided incomplete information. This is markedly different from the majority of players who absolutely require clear instructions and are thus far more likely to complain when they don’t know what is expected of them. For such players, the aesthetic flaw of tutorialization simply does not occur, although perplexity is an ever-present risk. The latter kind of player outnumbers the former by as much as 10:1 in the population at large, although it often doesn’t seem like it because confusion endurance is extremely common in those dedicated to games as a hobby (or, for that matter, a career).

This demographic observation also relates to the question of game manuals, raised by both you and Chris Billows in his reply to your piece, Breaking the Fourth Wall: Why Tutorials Ruin Games. I heartily agree with your remark that “The game manual was its own artform.” But the manual was also a liability: in early videogame design, the presence of the manual invited overdesigned game systems, that is, systems of such complexity that a manual was a requirement for playing. Yet at the same time, no arcade game could possess a player manual for obvious reasons. And in the rise of the mass market home console player with the PlayStation and PS2, the need for the manual was severely reduced by the recognition that it was the minority of players that ever even looked at a manual.

If you want to know why the manual has fallen by the wayside, look to this: the moment publishers learned that the manual was only being read by 10-20% of players, they saw an opportunity to shave off the cost. Curiously, it seems as if the players who would read the manual are also the players with confusion endurance – which is an odd sort of situation; the players who least need help understanding how to play are those that are most likely to read fully detailed instructions of play. I greatly admire manuals, and have enjoyed creating them – and I’m delighted that Nintendo games now come with a digital manual built in by default. But at the same time, we cannot expect the manual to return to its former prominence. It is a minority interest now, and it costs money to both print and translate it (the latter cost remaining even in the case of digital manuals). What we have instead, however, which represents an interesting development in its own right, is the rise of the wiki as a player-generated manual, and for certain games – particularly sandbox worlds like Minecraft and Terraria – the wiki should probably be understood as part of the game itself. This is a topic for another occasion.

Finally, I should like to address Chris’ concern that tutorials break the fourth wall, as linked to above. There is an obvious rejoinder: the “Game Over” screen also breaks the fourth wall, and more egregiously than any tutorial. What this draws attention to is that there is a distinction between the fictional world of the game, and the meta-world in which the player is operating the game. This is a secondary imagined world, usually isolated from the main fictional world, in which communications between the player and the game makers occur. The equivalent in theatre is perhaps audience participation, in film the “werewolf break” in The Beast Must Die (1974) or the message “Based on a true story” occupy a similar meta-fictional space, as does a good ol’ fashioned cliffhanger of the kind associated with classic serial films such as Flash Gordon (1936) and almost exhausted of its possibilities in classic Doctor Who (1963-1989).

Personally, I found the use of the meta-world to provide puzzles in Metal Gear Solid (1998) was far more jarring than any tutorial, but it serves to illustrate that we cannot count upon the meta-world to simply sit in the background. It is actually always in play – every time we choose to pause the game, we resort to it. But as a game designer, I have frequently faced the question of how much to resort to the meta-world during the tutorial, and my usual decision is to have characters remain sealed within their fictional world and use display text alone to refer to the meta-world. This, it seems to me, is about as elegant a solution to this problem as can be found. As an aesthetic flaw, I would say it is only when this is done clumsily – as when a character blurts out “press X to make me jump” – that it causes any degree of rupture (my term for being wrenched out of imagined experience). The distinction between player knowledge and character knowledge – well understood by tabletop role-players – is one that digital game developers would be wise to take to heart.

With thanks to you both for continuing our discourse,

Written as part of the Republic of Bloggers. All replies welcome.