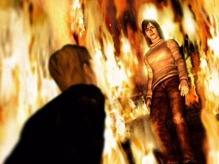 Dear Jed,
I can sympathise with your position in Silent Hill 2: Horrible Survival, Not Survival Horror, in that many of your criticisms are justified. Nonetheless, I shall defend Silent Hill 2 as one of the few times that commercial videogames have dared to push into artistic directions, and I still cite it as a triumph of narrative design within an industry that seldom achieves anything memorable in this space. The key to appreciating Silent Hill 2, however, may well be to place it within its historical context. Indeed, I am not of the opinion that games can be appreciated as artefacts divorced from circumstance (nor films, novels, plays, or music, for that matter!). The artefactual reading of media is, I now claim, always the incomplete reading.

I came to this game having been extremely impressed by the design of the original Silent Hill, which is more open, and cultivates a greater sense of freedom, than the sequel. However, Silent Hill is also a rather conservative game – it has its rather cleverly conceived setting to set it apart, but under the hood is a string of conventional puzzles punctuated with clunky combat. Nonetheless, at the time I was impressed with Silent Hill’s attempt to push beyond the rather limited ambitions of videogame experiences. It aspired to much, for all that it had problems delivering it.

When my wife and I went on to play Silent Hill 2, it annoyed me with its obvious staged linearity and almost total absence of what I, at the time, considered characteristic of game design. Where was the open structure of the first game? The tightly constructed progression? Why am I so constrained in almost everything I do now?  So it was with some surprise that,  after a few more playthroughs and considerable reflection, Silent Hill 2 eventually came to stand out as an exceptional case of game narrative. Indeed, I am hard pressed to find any game prior to 2001 that fulfils its narrative ambitions to the extent of this game – which is not to say that it is an unqualified success on all fronts. But then, my general view of game narrative prior to 2001, when Silent Hill 2 was released, is rather negative. There are signs of what might be possible… but they are rare, and almost always dragged down by an overbearing emphasis on puzzles or combat.

This is not the case for Silent Hill 2. For perhaps the first time in commercial videogame design (and I make a distinction here that you never do, in my experience), a development team took risks – serious risks, actually – to push their game away from the conventional expectations of the player community in order to explore a more artistic space. I will not argue that it is an unqualified success, but I believe what it does achieve has to be measured against its own contemporaries. This is the year of Grand Theft Auto III and Halo: Combat Evolved, videogames that take movies as inspiration and then… well, fail to reach narrative escape velocity, remaining parasitical on the original works. Silent Hill 2 builds upon the first game in ways that strengthen the originality of its premise; comparisons to Twin Peaks are tenuous: Kafka would be a more reasonable reference.

Crucially, I would never claim that Silent Hill 2 was the epitome of the survival horror genre – it quite obviously went in a radically different direction from the mechanics that support this kind of play. I agree with the others commenting on your blog that should be understood as a psychological horror game. It moves in the same direction as Dear Esther, which it may have been an inspiration for, but it did not have such a radical vision underlying its streamlining. (Indeed, as a fully commercial game, it could not have gone there). In this regard, it's funny reading your account because you obviously brutalised a great many of the entities in Silent Hill 2. I did not. I ran away. A lot. It’s a game that doesn’t require you to kill many of its denizens. It isn’t playing the survival card at all.

And this is what I think is wrong with your commentary here: it is mostly refuting claims made about Silent Hill 2. I don’t think you’ve let the game itself have its fair share, which is always (in my experience) a problem of trying to appreciate something that others have lauded insuperable praise on. This has certainly destroyed any hope of me enjoying various movies. Yes, the voice acting offers less than might be hoped – but in 2001, what game cannot claim this? (Also, should we not take into account that this is dubbed into English? Many Japanese movies dubbed into English are far more atrocious than this!). I can overlook this the way I overlook the melodramatic gesticulations of the characters in the 1920 Das Cabinet des Dr. Caligari, or the special effects in the 1960s Star Trek – to give two contrasting references that share in common only the extent of their break from convention at their time of origin.

Silent Hill 2 shares this same merit: it attempts something far beyond its predecessors or contemporaries. Clearly, the team do not manage to deliver an artwork of comparable magnitude to Dostoyevsky’s Crime and Punishment, which is their chief inspiration, but to even have chosen this as an ambition in a commercial game project in 2001 – when rivals are choosing The Godfather and Aliens as their template because these are, quite frankly, supremely easy influences to synthesise into a string of violent episodes, Silent Hill 2’s decision to construct a game in which violence can (depending on the player’s proclivities) be a tangential part of the experience is significant. This was four years before 2005, the watershed year for artgames, signified by Shadow of the Colossus, Façade, and The Endless Forest. It is amazing to me that Konami allowed Team Silent to go as far as they did from the comfortably well-trod road of mainstream commercial videogames.

Sadly, the general response to the game at time of release seems to have echoed your grievances, since by Silent Hill 3 the franchise returns to a far more conventional design – an endless string of combats, stitched together with an attempt at extending the story of the first game. Konami seems to have considered Silent Hill 2 a failure, at least in commercial terms; I persist in viewing it as a flawed triumph. Even now, sexual abuse as a theme rarely appears in commercial games, and (in respect of a different thread of the plot) while you are correct that ‘you are the murderer’ is an overused trope, here the focus is on the guilt brought upon by euthanasia, which is far outside of what we expect commercial games to attempt to deal with. Besides, the pivotal scene in this story occurs not at the climax of the story but in the final conversation with Angela at the burning stairwell in Lakeview hotel. Cut scenes are overused in the games of the 2000s, and most are not worth the expense behind them: this one is rich with a symbolism rarely attempted in games. Perhaps, in your ire at the design, you could not appreciate the successes within the narrative.

Regrettably, sharing this viewpoint has delayed my reply to your letter, but I could not stand idly by while you besmirch the name of a game that I still stand by as an early example of the coming willingness to break with the stultifying conventions of commercial videogame development.

Written as part of the Republic of Bloggers. All replies welcome.