The Voices of the Heretic Kingdoms 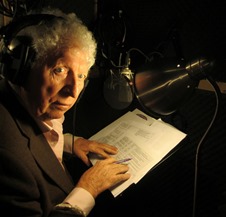 Tom Baker (pictured left), Sally Knyvette, Stephen Greif, Nicolette McKenzie, Robert Ashby – on my latest game project I’ve been working with some truly outstanding actors and actresses. But who are they, and what might TV shows, films, and games might you know them from? Take a tour of the voices of the Heretic Kingdoms!

In my career as a game writer and narrative designer, I’ve been privileged to work with some outstanding voice talent, including Rob Brydon, Kate Robins, Robert Llewelyn, and Nigel Planer – and that was just on Discworld Noir! But I’ve never worked with a voice cast as large as the one on Shadows: Heretic Kingdoms, and it’s been an incredible pleasure to work with so many talented actors and actresses on this project. This piece is my tribute to the voice cast for the new Heretic Kingdoms game, which also offers a few remarks about the characters they are playing.

This scurrilous secret council behind the Inquisition is currently the most powerful – and dangerous force in the Heretic Kingdoms, and the player is caught up in a vicious battle between them, the outcome of which could have terrible consequences for everyone.

This is the second time I’ve worked with Tom Baker, the first being the original Kult: Heretic Kingdoms, which was first published 8 years ago this month. In the first game he was the narrator – and gave a real sense of presence to the history and backstory that set the context for the unfolding drama. I knew I wanted to get Tom back the moment it was decided to make the new game a full cast recording, and there was one role that really stood out for him – Krenze.

In the first game, Krenze is High Sage of the Penta Nera, a bookish individual who is obsessed with knowledge, and quite unconcerned about what happens as long as he can continue his studies. In the prologue of Shadows, Krenze has become a fugitive from his former allies, seeking somewhere to hide, and throughout the game he provides travelogues that set the scene as the player enters new regions. Krenze isn’t exactly a villain, although he’s certainly no hero! I like to see him as an anti-villain.

Tom brought a real sense of smug satisfaction to Krenze’s character, with moments of menace that just peek through from under his seemingly benign exterior. He is something akin to the player’s mentor – but you never really trust him. Although this is a massive departure from the role Tom is most famous for – the fourth Doctor in long-running British sci-fi show, Doctor Who, Tom does have a history of playing baddies, and in fact was the vilainous Koura in the Ray Harryhausen stop-motion classic, Seventh Voyage of Sinbad, the very same year he started playing the Doctor.

The recording sessions earlier this year were full of the wit and sagacity I’ve come to expect from Tom – he always comes into the studio with a thorough knowledge of every obscure word I’ve used in the script. Indeed, I can always count upon him to know a correct pronunciation when I am unsure! Plus, his occasional outbreaks of swearing here and there make for wonderful outtakes that, sadly, are not really suitable to be shared with the rest of the world.

In the original Heretic Kingdoms game, Carissa was a key character, befriending the player’s character, Alita, and travelling with her towards the fateful events of its conclusion. The game had multiple endings – including ones where Carissa died – which made it difficult to know how to fit Carissa into the new story. But stalwart fans of the Heretic Kingdoms will be able to work out what happened, if they follow the clues in the new game…

I cast Sally Knyvette into the role of Carissa on the basis of her showreel, and only later realized that she played the space-pirate Jenna Stannis in the classic sci-fi show Blake’s 7 (beloved by Doctor Who fans, and made by Dalek-creator Terry Nation). Sally fell into the role of Carissa effortlessly, and was very demanding of her performance in the studio. I love to work with an actress who, upon delivering a line they’re not happy with, is keen to retake it. That shows a commitment to the work that is always admirable.

As well as her iconic role on Blake’s 7, Sally also provides the voice of Carmilla in the Castlevania game Lords of Shadow and its sequel, as well as playing Graia in Space Marine.

In the first game, Valkarin is the player’s mentor – although the relationship is headed for terrible conflict as the story develops. In the new game, Valkarin’s story arc is the strongest embodiment of the theme of the new story: are we free to be who we wish, or are we prisoners of our circumstances? I knew that I needed to cast someone who could bring gravitas to Valkarin, and someone who was also capable of taking a fantasy melodrama role seriously. Then I discovered Robert Ashby.

Although an alumnus of Doctor Who, having played the villainous Board in Timelash, what drew me to Robert for this game was his work as a Shakespearean actor – and I was not disappointed! In his pivotal scenes in Book 2, Lord Valkarin is delivered with such magnificent gusto that I truly believe we may have one of the most memorable encounters in computer RPG history. Judge for yourself when Book 2 launches next year.

Robert is no stranger to videogames either, having voiced characters in Populous: The Beginning, Ceville, and two of the Risen games. I was intrigued to learn, talking with him about Tom Baker (the two are good professional friends) that during the 1970s, Robert’s then-girlfriend, Louise Jameson, was playing Leela with Tom Baker on screen – much to Robert’s chagrin!

It was very difficult to cast Baron Evanger, another key character from the first game. He needed to feel and sound very different to Lord Valkarin and the other members of the Penta Nera, and I wasn’t sure how to make that happen. John Lightbody won me over with his showreel, and gives a commanding performance as the Penta Nera’s slave of duty. (And yes, fans of the drinking sequence in Kult will be pleased to hear that The Thirst for Revenge does appear in Book 2!). This is John’s first videogame performance – but I hope it will not be his last.

How do you cast a character whose strength of will is so great she literally returns from the dead? The relationship between Lord Valkarin and his mother, Lady Mara, is a key part of the story of Book 2, and I needed an actress who could stand her own against Robert’s amazing performance. Joanna took to the challenge with relish – I can’t imagine anyone else in this role now!

Joanna is no stranger to videogames having voiced Elizabeth in Dark Souls and Stowen in Dark Souls II. But I think in Lady Mara, she may have given life to one of the greatest female videogame villains of all time. Judge for yourself as she makes her debut in Book 2 next year!

The Devourer and its Souls

Casting the Devourer, the soul-eating demon at the centre of the player’s party in Shadows: Heretic Kingdoms, was a challenge, but Nick Ellsworth went the extra mile, recording incredibly alternative takes for various lines even before we cast him! He gives a sinister delivery to this creepy character, and there are some great exchanges between the demon and the souls it purportedly controls – played by Jamie Mitchie, Harriet Kershaw, Callum O’Neill, and Angus King in Book 1, with Ronan Vibert and Emma Powell joining in Book 2. Every one of these was a joy to work with, but Emma’s recording sessions were rapturous because she just fell in love with her absolutely wild character – and I know the players are going to adore her too when Book 2 launches next year!

Even though I don’t want to leave anyone out, I’m going to have to pick just a few highlights from the remaining cast. Stephen Greif – another Blake’s 7 alumni, having played the wonderfully sinister Travis in the 1978 season – was another pal of Robert Ashby, Tom Baker, and Sally Knyvette, and knocked his Book 1 role of Krek Bluntclaw out of the park. I have a regret here, as I really wish I’d given him a bigger role! So good, I hope we get to work together again.

Ramon Tikaram, who plays the jovial but less-than-trustworthy head of the Guild of Silk, Arashad, was another actor who just left me jaw-droppingly amazed. So much so that we wrote some extra parts for him in Book 2, just so I could get him back into the studio. A complete revelation behind the microphone, he’s been in a number of videogames including playing Gabe Weller in the Dead Space games, Pedro in Risen 2, not to mention Dorian in the forthcoming Dragon Age: Inquisition, which comes out later this month.

Then there’s Gary Martin, who provides several of the deepest voices of the game, including one that has a key role at the end of Book 1. I shall bite my tongue about this though, as I don’t want to spoil the surprise. Gary is a real videogame voice actor veteran, having voiced characters in Gunlok, Endgame, Stuntman, Micro Machines, Fire Warrior, Killzone, Star Wars: Empire at War and The Old Republic, not to mention playing Judge Magister Bergan in Final Fantasy XII. But honestly, nothing can top his awesome role in Shadows: Heretic Kingdoms – as players who complete Book 1 are about to discover!

Finally, I have to heap praise upon Nicolette McKenzie who plays the cold-hearted noblewoman Cyrene Akhdar in Book 2. This is a character I developed with Wendy Despain several years ago, and that I was thrilled to bring to life in this game. Nicolette, unusually, asked to see a picture of the character, and having done so instantly fell into the role like she was born to play it. Nicolette is no stranger to videogames, with voice credits including Ezekiel in El Shaddai: Ascension of the Metatron, Lady Clarissa Westmacott in The Raven, not to mention the narrator of Dark Souls II. I hope the players love Cyrene as much as I do when she makes her debut in Book 2!

Sadly, I don’t have time to tell you all about the great performances given by Rupert Farley, Maria Darling (whose character you’ll love to hate!), Tamara Payne, Nick Sayce, Stephen Marcus, and last, but by no means least, the incredible Marc Silk – who recorded more different characters for this game than anyone else. What an incredible range! But you can check them all out when you play Shadows: Heretic Kingdoms for yourself.

The first part of the story, Shadows: Heretic Kingdoms, Book One, is launching on Steam later this month, with Book Two following next year (and free to those who buy Book One). Check it out!