The Echoes of Genre 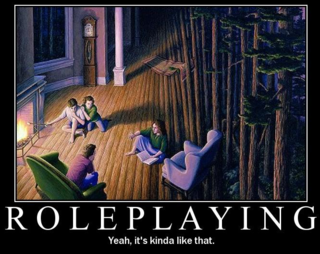 Your letter to me, The Game of Defining RPGs, was warmly received for many reasons, but not least of which was your willingness to play with my methods - to play my game, if you will. While others certainly read me, no-one has yet engaged with what I'm trying to do in philosophy of play so directly - and for this I am both honored and grateful. You've taken the idea of prop analysis I developed in exploring why The Hobbit movies produced such different aesthetic responses and applied this idea in a wider context. And in so doing you have brought me back to an old bugbear: genre, and specifically the meaning of 'RPG'.

This question of genre is as seriously contested as those concerning 'what is a game?' or 'what is art?' - and, I suspect, for the same reason! They all revolve around an attempt to erect boundary fences: a question that begins by seeming to ask 'what is to be included?' ends up tacitly being about what is to be excluded. It was thinking like this that led me to the kind of argumentation I put forward in Implicit Game Aesthetics, whereby the very attempt at exclusion could be taken as a sign for individual aesthetic values. By exposing those values, I hoped (and continue to hope!), we might see more clearly what we were talking about. The whole idea comes from Kendall Walton who deployed a similar argument in respect to art, joking that "it's that darn concept of art that has made it so hard to understand art."

Your idea in this letter is that we can use prop analysis in connection to specific genre terms to uncover which artworks are serving 'in the background' of the deployment of any given term. This is a brilliant move, and wholly in the spirit of Wittgenstein, whose philosophy is a common touchstone for both Walton and I. In effect, you're crossbreeding between the prop analytical method and the implicit game aethetics method - uncovering aesthetic values rooted less in phenomenal experience and more, as you suggest, in sentimental recollections. (This term 'sentimental' gives me pause, however, since it is so often used pejoratively, but I had best overlook this for now.)

As you suggest, 'RPG' is the locus of intense disagreements - and for precisely the reasons you identify: different props (i.e. different games, in this case) are being used to establish boundary criteria. But I must reject your suggestion that players of the original Dungeons & Dragons "should have the final word on what constitutes an RPG video game" - even though this temptingly offers me, as one such player, all the power! The trouble is, what digital games have inherited from D&D and its successors is too multifarious for it to possibly act as a backdoor arbitrator. As I outline in Imaginary Games, the entirety of contemporary videogames descends directly from D&D, and its elements can now be found everywhere from Call of Duty to FarmVille. The whole concept of an avatar - a singular character in a game with an identity relevant to play - arguably comes from D&D, although there are hints of it in earlier games such as Cluedo/Clue.

Furthermore, to give us grizzled tabletop veterans priority in debates about RPGs would be to substitute one set of disputes for another - since tabletop players are equally at war over their definitions! Not only are the 'essential' elements disputed, but vicious battles occur over 'how RPGs used to be played' i.e. over the meaning of 'old school' in the context of RPGs. These disputes occur because - surprise surprise! - there were many different ways these games were played at the beginning, and thus many rose-tinted recollections about a golden age that exists solely in memory. This conflict can be expressed in a rather simplified fashion as between adherents focussing on 'role-playing' and those focussing on 'game' (or, as it is sometimes impishly blushed, 'roll playing'). The essential question is whether their practices were about playing characters and thus about generating narrative (as it always was for me) or about simulation, challenge, and failure. Indeed, 'old school role-playing' is most often taken to mean absolutely enforced, dice-generated permadeath (as it is now called). Adherents to this style believe their play is more 'realistic', which is in itself a strange and fascinating claim, although beyond the scope of our discussion.

Part of the further problem here is that computer RPGs have two distinct lineages that branch away from tabletop - the Western RPGs, which result from directly adapting D&D game mechanics (e.g. Wizardry and also Alkalabeth and its descendants, the Ultima games), and the Japanese RPG which results from successfully copying that form in Japan (largely thanks to Henk Roger's Wizardry-inspired export The Black Onyx). Western players, then and now, prioritise agency above role-playing, and Western RPGs largely share this bias. Japanese players, then and now, tolerate greater mathematical content and prefer clearly defined roles (pre-established characters) - although this does not mean greater role-playing occurs in these games! Crucially, neither lineage is able to fully assimilate the 'role-playing' aspect of the tabletop RPG, because of the constraints of the computer format.

It is worth being clear that generating a  character - valorised in the Western cRPG culture as an expression of agency - was not essential to the tabletop games. Some game systems (e.g. TSR's The Adventures of Indiana Jones), and even more individual scenarios, allocated specified characters to players, inviting players to take on that clearly-defined role. This may seem to resonate with the Japanese lineage - except in those games the developer did almost all of the role-playing when they sketched out the narrative during the early stages of the project. The players of the Japanese RPGs are left with limited opportunities to play as the roles given to them. And ironically, in the Western lineage the dominance of agency as an aesthetic value means that you can do 'anything' as long as it doesn't involve expressive character interactions (the quintessence of 'role-playing'), which cannot be easily modelled on computers. So neither lineage takes up the torch of the 'role-playing' aspect very effectively, and instead both follow on directly from the 'game' aspect of early RPGs.

Ultimately, invoking history to solve this debate will not work, and for similar reasons any hope of a genre taxonomy for games along the lines of the Linnean taxonomy of animals (as I once naively pursued) is utterly doomed! Descent in games is a fractured panoply of influences, and is never clear and direct except in the cases of the most blatant clones. It was for this reason that I decided when starting to teach about the history of games to use 'lineage' as a term that could be a kind of rhizome (obligatory nod to Deleuze and Guattari) as a partial solution to the problem. But of course, this sidesteps the truly Wittgensteinian problem of 'the meaning of a word is how it is used' - I'm focussing upon connectivity in the artefacts and ignoring how the community discusses the genre terms.

This is where you come in, with the parallel game - the game of defining RPGs - and your unique twist on my methods: to identify which specific games are serving as props in the background when genre terms are deployed. This can't end the disputes but it can certainly illuminate them by showing which specific games inspired the aesthetic values tacitly invoked to defend boundaries. Although, as my discussion of early tabletop reveals, this approach has to go beyond just the games as artefacts, since there is also the vital matter of the practices that defined play for each player community. For tabletop RPGs perhaps more than for their digital progeny, those practices were as diverse as the game systems on offer!

On the matter of your 'unsentimental RPGs', I am curious as to what you mean to connote with 'unsentimental'. I presume this is intended to stand against what used to be called 'romance' (not in the contemporary sense, of course!), as can still be seen in the title Romance of the Three Kingdoms, broadly meaning 'fantasy'. So does your 'unsentimental' mean something like 'unvarnished'? Writing this makes it quite clear to me that it is not so easy to qualify the property you want to mark... Is it an absence of sentimentality or a presence of unpleasant sentiment - perhaps an opening of emotional wounds in order to share the experience? Mainichi seems to fit clearly into the latter case. There appears to be something of a leaning towards the literary here, but 'literary' doesnt seem an appropriate adjective. I am frankly at a loss to suggest what is, so perhaps your 'unsentimental' is as good as anything, having the distinct merit of already being successfully deployed!

I wonder, then, whether Tale of Tale's Bientôt L'été would qualify as 'unsentimental'. On the surface, it could be objected that it doesn't have anything in common with computer RPGs - which is indeed the case. But it has rather a lot in common with tabletop RPGs that focus on the 'role-playing' and not the 'game'. It invites its players to play at being the broken lovers of its world - I have said of this in my critque, Almost Summer, "there is more of the authentic experience of role-play in Bientôt L'été’s flaws than in all of Bethesda’s perfections." This is my way of saying that for the practices of tabletop role-playing that I valorise, this digital game comes closest to participation in what I call 'role-playing'. Yet presumably you, drawing your usage of 'RPG' against the practices of Final Fantasy, would not be able to resolve this as an 'unsentimental RPG'. If so, perhaps the label could be widened even further (to admit more games) or tighened up (to narrow the focus for clarity). You seem especially focussed upon the sociological aspects of the games you mention - perhaps rather than unsentimentality it is sociological critique that interest you here?

Finally, you ask how we can nurture pioneering spirits without sounding like one is playing alone. The answer to this, I suspect, is that we can break with one community without becoming a hermit. There are always, after all, other lineages and other practices we can connect with - we do not even have to remain inside the practices and artefacts of games! When we want to draw attention to something new in games, we have the option to draw attention to values or movements from other media, for instance. It is quite unlikely that anything new will occur in a vacuum, and concommitantly likely that our appreciation of something new will be grounded in other practices. New directions in the worlds of art, to use Robert Hughes' memorable phrase, often involve 'the shock of the new' - but we recognise what is novel as a contrast against what is known. That means that each new direction is likely to connect to existing practices - even if only by rebelling against them. In this way, the idea that 'no-one plays alone' carries through, even with the most innovative of games.

With grateful thanks for your interest,

Jed has not replied yet.

No-one else has replied yet.