An open letter to Sheri Graner-Ray at FEM IRL as part of the Republic of Bloggers. Other replies welcome! 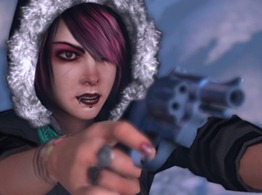 For about a decade there, we were running into each other once or twice a year, in California for GDC (where we both hosted events for the IGDA), and sometimes in your neck of the woods for the equivalent event in Austin. Life inevitably moves on, and in my transition to father I am not quite the International Hobo I once was, even though I still consult under the brand of the company I founded. There are so many great people I miss from the US conference circuit that it would be dangerous to start listing them lest this entire letter was just a who’s-who of wondrous games industry folk, but I really miss not getting to see you and my “Jazz man” Joe Saulter at GDC, and I learned so much about the social problems of representation in games from your respective round tables – fixtures of my GDC schedules every year I went.

Women and the Games Industry

I'm writing in part to ask: has the situation improved for women in the games industry, or games as a hobby? I have not really seen much sign of progress in employment terms... My first boss, Angela Sutherland at Perfect Entertainment, is still the only female executive I've worked with, although Nicole Lazzaro introduced me to a few at Casual Connect in Seattle a few years back. If there are more women going into games as a career, it is still a long, long way from parity, and there seems to be a definite problem transitioning from ‘the production line’ to the boardroom.

But then, on the other side of the coin, I feel like the ‘Casual revolution’ spearheaded by companies like PopCap, and the ‘social games’ gold rush that followed, have at least put pay to the lie that “women don't play games”. Yet this gain seems to come at an odd cost, since the design-by-metrics approach that undergirds the business model of the so-called social games is entirely gender-blind, seeing women as simply another source of revenue. Better, perhaps, than naively believing women will not spend money on games, but hardly likely to encourage the creative exploration of the new visions that female developers might bring to the table. Do you have any thoughts on this?

Of course, social games do not really foster community, they are viral rather than communal in nature, but our industry does have a genuinely social genre in the form of the MUD and its descendant, the MMO. I loved my time in the two MUDs I played at university, the Star Trek-themed TrekMUSE and Manchester University's own UglyMUG. In the former, which was very supportive of role-players, I was a Romulan ambassador who, after a romantic liaison embroiled her in scandal, retired to a shrine where I officiated over weddings. UglyMUG, which still runs today, was less of a role-player's world but was always extremely social, and changed the course of my life. I treasure my memories of both games.

You, I know, have maintained a relationship with the truly social games and still to this day play City of Heroes avidly. I saw it demoed at E3 many years hence and knew I wouldn't be able to play it – the ‘RPG’ in ‘MMORPG’ ironically excludes me, and not because I don't like RPGs – on the contrary, I like them a little too much! They bring out my obsessive tendencies, and my wife has sensibly limited me to playing just one computer RPG a year. An MMORPG with its indefinite play length would be very dangerous for me to play.

I'm curious, then, about your experiences of community on City of Heroes. I think you were a MUD player back in the day (way to make us both sound old, right?) – do the new games manage to sustain the tight community and opportunities for role-play that the MUDs and MUSEs excelled at, or did they all fall down the hole of the LP MUD and DikuMUD, overjustifying their play with compelling reward structures? Can you say of your fellow heroes that they are friends, or merely that you play together?

For myself, I seem to have been cursed with having to play gun games. I say ‘have to’, but what I mean is that my regular weekly game with friends (which sometimes plays boardgames, and sometimes plays online) has devolved into multiplayer co-op gun games like Counter-Strike and Payday out of a certain necessary convenience they provide. There are limited opportunities for obsessive reward structure pursuit, and the short play time of each round makes for easy stopping at the end of the night. I note that my brother-in-law, who shares my obsessive response to cRPGs and thus avoids them, has ended up playing similar games with his regular gaming group.

What slightly troubles me about this is how inured to gunplay it has made me. When my wife and I went to the US embassy in London to get my residency papers sorted out (for the time I was living in Knoxville and working with a number of US clients), I was disturbed to see the security staff armed with firearms. When we came back a few years later to get my son’s dual citizenry and US passport, I calmly noted “they're packing MP5s”. This was a direct response to years of playing Counter-Strike which, like it or not, has changed my relationship with guns.

I would still rather play a fantasy game or even a superhero game like your preferred MMO, but no-one is making these in the readily-playable forms that can slot into the odd night here or there. Instead, players like me are becoming accustomed to firearms in the same way we are all now so used to living with cars that we can't even acknowledge the deaths they cause without invoking some kind of dismissive excuse. It's a topic I dig into a little in my next book, Chaos Ethics, and it does trouble me: we can’t seem to look our technology squarely in the robotic eyes.

As a game designer, I can scarcely turn my back on technology at this point, but I worry about the representation of violence in videogames (and the tacit valorisation of gun violence) as much as I worry about the representation of women (or lack thereof). Although my Tennessee born and bred father-in-law has given me a much greater appreciation for the love affair with guns that your nation pursues, I cannot shake the worrying sense that the romance of guns on TV, in the cinema, and in videogames, is not something entirely neutral in its cultural effects.

Blood and Guts
You have said that women players in your experience don’t mind the violence in videogames – my experience is slightly different. There are women gamers who don’t mind the violence, certainly, but those people I've seen who are troubled by game violence and gore tend, in my experience at least, to be women. I think of the UK trade rep who came with me to see the unveiling of Fallout 3 at  the Games Convention in Leipzig: her eyes almost literally popped out of her head when she saw that the game literally had eyes popping out of heads. Not to mention the option to make the game even more gory, should you wish to.

The thing about this issue that troubles me is that I think you’re correct to see this as not specifically a gender issue, yet I think female voices are the most likely way to get traction on alternative representations of violence in games. Men who don’t get on with these kind of things tend to simply avoid them. As a case in point, I have a penis but still don’t enjoy needlessly bloody games: one look at Team Fortress 2’s combination of cutesy graphics and gore was enough to turn me off forever. Similarly, Rob Brydon, who did voice work with me at Perfect, wouldn’t record our arena tank game’s sports commentator because he didn’t like to hear his own voice inciting (imaginary) violence.

Freedom of expression protects the portrayal of violence in games, and its not something I want to push back against politically. Yet I would like more alternatives... I’d like more experimentation in the fiction of games and less dependence on guns and cars. If helping women developers find their own creative voice isn’t a way to foster this, then I fear I will just have to accept the current status quo – and that does not please me.

Anyway, I hope this letter finds you well, and not too irritated by the endless stream of legal letters that mega-corporation Cengage (which publishes books by both you and I) has been deluding us with in relation to its 'restructuring' boondoggle. I’ve committed this year to writing more letters to other bloggers, since I have let my community evaporate and – shamefully – have blamed it all on other people and the rise of the social networks. Facebook and Google+ have been a factor, but I also stopped talking to other bloggers, and that was my fault. With that in mind, I had to write to you as one of my first ‘letters’ since back in 2006 I implored you to blog, which you now do.

One last thing: was it you or Brenda Brathwaite (now Brenda Romero) that I was talking to in Austin about the boardgame Pandemic? Okay, I said I wasn’t going to devolve into name-dropping but I can't for the life of me get that memory straight in my head!

Wishing you all the very best,

Sheri has confirmed that she will be replying sometime soon.

No-one else has replied yet.