Is the Interface the Game? 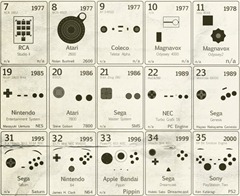 Marshall McLuhan famously claimed “the medium is the message” – does this mean that for videogames ‘the interface is the game’?

McLuhan's point was that every medium takes its own unique form that is intricately entwined with the content being delivered, and that radically changes how that content is understood. This drew attention to the essential characteristics of different kinds of media, since in McLuhan's view a medium can control “the scale and form of human association and action”. For movies, he suggested that their very nature played with concepts of speed and time, making configuration more prominent than in, say, novels. His concept of ‘medium’ was also extremely broad – he suggested a light bulb was a medium without content that still changed human interactions, creating spaces otherwise unusable at night such that “a light bulb creates an environment by its mere presence.”

Applying McLuhan's insight to games, one possible interpretation is that ‘the interface is the game’. Thus whatever the content of a fighting game, the medium creates a social or personal status contest between direct or indirect competitors over their ability to operate the controls. An MMO configures large number of players into a community who interact solely (or at least primarily) via their own personal projection of the fictional world of the game. A touch screen puzzle game isolates its players from the world around them via the kinaesthetic interaction of stroking and prodding the device in their hands – a different consequence from a console or arcade implementation of the same game, which more explicitly invites observers to vicariously participate in the experience. In the case of the dancing game, this spectator role is even more explicit because the interface now presses the entire body of its players into its service.

Developing his aesthetic theory of games, Graeme Kirkpatrick expressly draws attention to this kinaesthetic dimension of videogame play, and the extent to which the control devices have been systematically ignored in the study of games. While this falls short of McLuhan's broad perspective (which focuses upon the social reconfigurations wrought by media technology) it moves in a similar direction – and is a perfect fit to the adage ‘the interface is the game’. However, for Kirkpatrick, the interface is only ever kinaesthetic – the imaginative experience is only a wrapper to be removed (as I critiqued last week). This simultaneously goes too far and not far enough – it foregrounds an extremely important part of fighting, shooting, and other fast-paced games that is indeed often overlooked, namely kinaesthetic control-device manipulation. Scholars interested in games do not, as Kirkpatrick justly accuses, pay enough attention to this aspect of videogame play.

However, it must be noted that Kirkpatrick's form theory ties the aesthetic experience of videogame play to the mastery of interfaces. This offers valuable insight into certain kinds of play that are control-focussed – and not just in videogames. Pinball tables are perfectly suited to the kind of understanding form theory offers, for instance, and also fit Kirkpatrick's observation that an entire generation of young boys grew up “dancing with their hands.” Elsewhere, however it begins to seem less plausible, especially in games that allow time for decisions, such as turn-based strategy games, point-and-click adventures, or explorers that are not challenge-focussed such as Noctis or Proteus. Here we need a different understanding of ‘the interface is the game’ where ‘interface’ is not just referring to control devices but the entire conceptual ontology of the fictional world of the game.

Some examples will help clarify this point. Although its implementation could certainly be more user-friendly, Noctis has an interface designed for cataloguing (fictional) astronomical objects. The player sees themselves as explorer, but acts as record keeper as part of a (badly connected, alas) community of record keepers. Turn-based strategy games traditionally have an interface that rests upon the player imagining perfect control over numerous things that could not plausibly be controlled in the equivalent situation outside of a game – they sell a fantasy of control closely related to Alaisdair MacIntyre's myth of managerial effectiveness. Games like Proteus and Dear Esther subvert the interface of the FPS by using identical control schemes that are stripped of guns and weaponry. The message of these thin play games is not so much the interface as what has been removed from it – and what this then allows to be foregrounded. This is still very much in the spirit of McLuhan's ‘the medium is the message’, but it is a long way from what Kirkpatrick's form theory is best suited to describing.

There is indeed a sense in which the interface is the game, but this ‘interface’ (much like McLuhan's wide reading of ‘medium’) is more than just the control devices. The interface is what connects players to the fictional world of the game – and via this, to one another in Miguel Sicart's ‘virtuous community of players’. It is what we denote by the phrase ‘avatar’ which must (as I argue in Imaginary Games) be something other than the character model (what I call the avatar-doll) since the avatar as a concept need not be depicted. Indeed, in most text adventures it was never represented, not even verbally. The interface is something akin to Huizinga’s magic circle (at least as Salen and Zimmerman have this), or perhaps it would be better to say it is the site of this rather porous boundary between fictional worlds.

‘The interface is the game’ means that the game is more than an object – it is a point of connection, a rhizome (as Deleuze and Guattari have it) that lies out of sight, under the figurative ground, connecting game designers, hardware designers, silicon chips, software routines, critics, players, FAQ writers, and more besides into a subtle network of connections. The interface is our way in – but into more than just the fictional world that the game represents. It is our way into something very real yet totally imaginary, something more than an individual game experience but substantially less than a totality. In the medium of games, the message always has more to it than meets the eye – or the hand. Yes, the interface is the game, but both entail far more than they seem.