Is Gordon Freeman a Character? 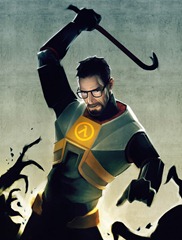 Every poll asking gamers to rate the best videogame character is topped by Half-Life's Gordon Freeman. But is Gordon even a character, let alone the best that games have produced?

This question hinges upon what we mean by 'character', of course. The argument that Gordon qualifies – despite his lack of a clearly recognisable personality or identity – rests on the assumption that a player-character should be an empty shell for the player to inject themselves into. This is perhaps an expression of the agency aesthetic that valorises choice in games. Trouble is, player-as-Gordon has precious little choice because his world consists solely of puzzles to solve, things to crowbar, or things to kill. So if this is the relevant criterion, it doesn't seem like Gordon has the substance to back up his claim to supremacy with any kind of legitimacy beyond popular mandate.

Under this particular criterion, a playable GTA 'character' would seem to have an edge, unless the argument supposes that explicit character traits undermine player agency somehow. But again, this seems to be an argument that player-characters should be blank slates – and on this basis it would seem that a poll of 'best game characters' would be forced to consider supporting cast over lead characters (at least in an idealised perspective on the issue). Either way, Gordon's claim to be a character is weak, and his claim to be 'the best' game character is extremely tenuous. In a 2002 paper, James Newman suggests precisely this kind of 'vacancy' understanding of the player-character in videogames. He suggests that while in active control "the appearance of the player's character is of little or no consequence." Talking of Lara Croft in Tomb Raider games, Newman argues that "in playable game sequences... we don't have to think about her in terms of representational traits and appearance – we don't even have to think about 'her' at all." We've seen this argument before: it's precisely what I have lambasted as fiction denial.

I agree with Newman that player-characters under direct player control can be "conceived as capacity - as a set of characteristics", but this is not an admission that these capabilities do not constitute a character. No-one could seriously argue that Indiana Jones whip was not part of his character's identity, nor that Luke's lightsabre is not a part of his. Similarly, as the picture above emphasises, Gordon’s crowbar is a part of his ‘character’, such as it is. Action stories have always allowed the tools and capabilities of their heroes and villains to be conceived under the broad umbrella of 'character', as superhero stories make abundantly clear. As an example to underline this point consider that it would be decidedly out of character for James Bond to escape a jail cell using a paperclip and a piece of cheese, but entirely in-character for MacGyver to do so.

Newman suggests that we need to recognise the segmentation of videogames – they comprise of movies, menu screens, maps and so forth just as much as controlled play of a character model. Indeed, Newman is at his most brilliant in his suggestion that we recognise play need not be understood in terms of control. As he specifically observes, players can be engaged with a videogame even when they aren't in control, stating: "The pleasure of videogame play does not simply flow through the lead of a joystick." The trouble is, he then tries to suggest this segmentation can be used to compartmentalise character into sections absent of control, and reduce controlled play to one sensory mode, asserting that "the pleasures of videogame play are not principally visual, but rather kinaesthetic." Graeme Kirkpatrick argues the same – but it's an odd argument upon inspection since it only applies to some types of play and some types of game. The enjoyment of turn-based strategy is not kinaesthetic, and players of Res or Proteus must surely balk at the suggestion that the pleasures they are enjoying are not principally visual – unless, of course, it was to acknowledge how important sound is to these games.

The idea that segmentation of content eliminates character from control-based play faces serious issues when it is compared to other media. In an action movie, shall we say the hero only has character in dialogue scenes? That when a stunt person stands in for the actress that her character ceases to be in effect? That in a car chase we are not supposed to imagine the characters are within the car? The urge to reduce videogames to kinaesthetics is a strange kind or reductionism in that it is oblivious to the variety of player experiences, and particularly to imaginative experience. Just as we imagine the character in a film is present throughout the movie, many players imagine the character is present throughout the game – and they are not crazy to do so. This is a perfectly normal way to play a game, and for some players the imaginative experience is far more crucial than the kinaesthetics. That said, the kinaesthetics of play are all too often overlooked, and Newman and Kirkpatrick are an antidote to this blindness – indeed, the latter's aesthetic theory is perfectly suited to fill a gap in our appreciation of videogames as artworks. But only this one particular gap. The imaginative gap of fiction denial needs a different aesthetic theory, something closer to what I present in Imaginary Games.

Returning to the question of character, Newman's suggestion that Lara is not a character during controlled play seems implausible if imaginative experience is allowed to constitute play (as surely it must, or else diceless tabletop role-playing games become hard to explain). But his criticism lands squarely on Gordon's geeky shoulders, because Gordon – quite unlike Lara, as it happens – is never really a character in the conventional sense and is only ever his capabilities and a general impression supplied by the box art. (Gainful parallels can be made here with the covers of contemporary fantasy novels). Newman's argument is not as general as he suggests – it applies far less, for instance, to Shenmue's Ryo, whom the player is expected to embody in a far more personal, role-oriented fashion. Even outside of the formal advancement of the story or Ryo's fighting skills, his child-like love of capsule dispensers frequently bleeds into the player's own motives during play. His cry of "I love those!" often becomes mirrored in the player – there is more of a character in this trivial example than at any point in Half-Life!

'Characters' like Gordon Freeman can be understood as cyphers (trivial characters) for the player to imagine themselves inhabiting. This approach to game narrative fits an implied contract of play which favours letting the player act out in the game world however they wish (while practically constrained by the design of the game). But a different contract between game and player – such as that which Yu Suzuki attempted in Shenmue – implies very different notions of character in games. My colleague Ernest Adams recently completed a doctoral thesis, part of which argued for the benefits of an implicit contract between player and game that effectively acknowledges the idea of playing 'in-character'. Concepts such as these could lead to games with much richer player-characters who were far from mere cyphers. They might not knock Gordon off his pedestal, but they'd be far more effective at elevating the artistic status of videogames than any cypher.

Now my doctorate is cranked one more step towards completion (and I am now technically a ‘doctor’) the blogs shall return! Over the next few weeks, I’ll be exploring some interesting questions in the corners of game studies and game philosophy…