What Would Make Me Buy a New Console? 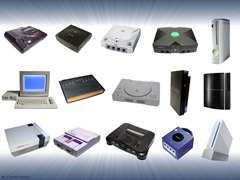 I’ve been wondering: what would make me consider buying a new console? The answer, it seems to me, would be “running out of games to play with my wife on our existing consoles”. On the whole, this doesn’t sound like much of a reason to ‘upgrade’, since there are huge numbers of games out there – but the interesting thing is, the kind of games that my wife and I play together seem to exist in shockingly small numbers.

We have recently been favouring platform games – which is why we’ve mostly been playing on the Wii, since Nintendo are one of a very small group of companies still making platform games (rather than, say, “run and guns”, or even just “guns”). We’d like to play puzzle games of the kind we used to enjoy – something like, say, Bust-a-move or The New Tetris – but we have no way of finding them. I used to look at the demos coming down the pipelines for PS3, but you can only eat so many turds before you lose your appetite.

I simply don’t have the time to play the kind of games that the consoles are offering as boxed products, unless I play with either my wife or my “Boy’s Night” gaming group, and the latter isn’t console-based because I refuse to pay Microsoft a subscription fee for anything, forcing us to play on PC instead. I still stay abreast of the new releases by getting people to demonstrate them to me, and I have to say I don’t feel like I’m missing much. Of all the boxed products released in the last year, the only one I would have liked to have played was… erm… no wait, it’s on the tip of my tongue… nope, it’s gone. That’s how enthusiastic I am for boxed games – I can’t even name one I want to play.

I played some great games in 2012, like Journey , Dear Esther, Proteus and Bientôt L'été – but not one of them was a boxed product. I have owned ten different home consoles over the years; in order, they were the N64, Megadrive (just for Micromachines Turbo Tournament!), Saturn, Dreamcast, PS2, GameCube (still one of my favourites), Wii, PS3, Xbox 360. I have huge crates of Dreamcast, PS2 and GameCube boxed games. I have a stack of Wii boxed games. I have one boxed game for the PS3 and one other for the Xbox 360. Partly, this trend reflects less available free time (from working multiple jobs and from being a new father). But partly, it reflects a dissatisfaction with what is being offered, which is primarily gun violence with a side order of misogyny, cars and blade violence. In short, I am bored of what boxed videogames have come to offer even though I still enjoy videogames and would like there to be more I want to play.

Have I fallen away from boxed product gaming? Or has it simply failed to retain my interest? The answer seems to be a little of both. But looking at this situation all I can  really say is that I will eventually have to buy a Wii U in order to keep a supply of quality platform games, but I have no reason at all to even consider the new Sony or Microsoft consoles – even though I have no idea what they will turn out to be. I may not be typical of the audience for games, but I doubt I’m alone.

What would make me buy a new console? The answer seems to be, very little indeed. Yet oddly, I feel quite sad about that.

I can understand for someone who has made their bread and butter and trade out of the games industry to look out for new games out there. Although I am one who understands more that life just gets in the way.

The only times I've really started playing games lately is when I am too tired to do anything else or think about anything else, or if its social. I think recently, much more than ever, games that have a social component have been much more of an appeal. So this has been Christmas (where multiplayer games of the console sort are a tradition) and playing with friends.

At the moment it seems a very stale time for consoles. The next generation is really overdue, and I've found my gaming needs satisfied beyond the console of late. Apps like Foursquare (even Google Maps on my phone); Mapmyrun which is more for logging walking and running; fitocracy and little app games like draw something and the non-copyright infringing not-scrabble game I'm playing with my friends keeps me going.

I sympathise with your view about the dire state of consoles. I've also heard a bit of news about Valve getting in on the market. Perhaps variation might change the state of affairs for the dominance of Sony/Microsoft(/Nintendo)

We've talked in the past about how many games have relied on the lazy thinking and design of being basically an improvement of the previous model (CoD for example), perhaps this is how such a model might implode on itself and leave for something different and new!

Damn, TypePad just ate my comment! I agree with what you say here about the sense of staleness, although there are many gamers who are very satisfied. I suspect the further you get from the average player, the less satisfied you will be. Diversity of games has been sidelined to the online channels, with a commensurate step down in quality.

Also, you are not alone in finding more and more gaming entertainment outside of the console space - this is the situation in a nutshell, and perhaps the biggest challenge the home consoles face. The handheld consoles are even more vulnerable - why buy a dedicated machine for games when there are so many games for tablets?

I can't shake the feeling that another console crash might be a possibility, although it's also worth noting that even the games-as-product franchises like Call of Duty are tacitly operating as services by offering a new title every year. It might not be the consoles that are at risk, but the high street with its focus on boxed product. But then, the consoles actually depend upon the high street for a lot of revenue! The failure of one could take down the other.