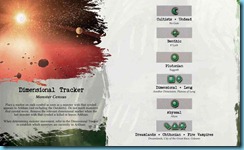 This post collects some variant rules, resources and strategic advice for Fantasy Flight’s Arkham Horror board game. All content presented here is unofficial.

Above is the “Dimensional Tracker” card for use with Arkham Horror. You can download a print-ready version of the Dimensional Tracker (2630.1K) image by clicking on the link. This card does not change the rules of play, but makes it easier for players to follow the narrative implications of the gates in play, and for new players to keep track of monster movement and the effects of gates closing.

Every time a monster appears in Arkham, place a counter on its relevant dimensional symbol on the tracker (unless there is already a counter there). You do not need to track those monsters that don’t move (yellow border).

Whenever a Mythos card is drawn, two sets of monsters will move – either the first two, the middle two, or the bottom two sets listed on the card. Simply refer to the card to determine if there are monsters in town to move – if there are no counters on those dimensional symbols, no movement is required. Except for special Mythos cards, if one symbol of the pair moves on white, the other moves on black. (It doesn’t hurt to periodically check who is in town, just in case the tracker is wrong).

The Dimensional Tracker also gives names to the creatures based upon the corresponding gate symbols, as follows:

Hence the first player has the option to read out (on a relevant Mythos card): “Plutonians move on white, so Dimensional and Leng move on black”. Once the titles for monster-types are learned, this adds a more narrative slant to the movement of monsters.

New players to Arkham Horror tend to lose – a lot – as they get to grips with the game. For players who would prefer to learn without losing, the following two difficulty adjustments are recommended:

Also, it is recommended for inexperienced players to try to play with at least four investigators, since the game is substantially harder with only one or two investigators. If there aren’t enough players, consider giving multiple investigators to each player.

New players of Arkham Horror tend to see getting Devoured (losing your investigator and getting a new one) as the worst thing that can happen. In fact, getting Cursed can be far worse than being Devoured and new players should try to see the upside to being Devoured. When an investigator is Devoured, you (as the player) still get to keep all the trophies accumulated by that investigator – both gates and monster trophies. You only lose the investigator and all their all equipment – but you can choose a new investigator who starts with all-new kit.

Whenever you have an investigator who is badly set up, crippled by permanent effects, or who just can’t work in the current configuration of the game, look for a way to get them Devoured. (This is, frankly, very much in the spirit of an H.P. Lovecraft story.) You will then be able to replace them with a new investigator, and you can choose the investigator whose ability is best suited to the current situation in the game.

This is a simple house rule that will lead to more enjoyable games of Arkham Horror for many players.

Because of the huge volume of random factors involved in setting up a game of Arkham Horror, it is possible for the investigators to start with a very awkward initial configuration – one that might not be much fun to pursue. To defend against this, and to allow investigators a better chance of beginning with cards that suit their identity and nature, after drawing “Random Possessions”, each investigator can be allowed a veto of one such randomly drawn cards. Common Items, Unique Items, Spells, Skills and Allies can all be vetoed in this way – but only if they were drawn as random possessions.

Each investigator only gets one such veto, and it can only be used before the first turn of the game has begun.

This is a variant that extends the basic game so that winning investigators can continue on to play against a new Ancient One. The Servitor and Master variant is best suited to those players who are proficient with the basic game and would like a chance to take successful investigators out for a second spin with everything they have accumulated so far.

The basic format is that two Ancient Ones are assigned for each game – the Servitor (which must be fought first) and the Master (which is fought only if the Servitor is defeated). Players may either randomly select two Ancient Ones, and then decide which is the Servitor, or divide their Ancient One cards into two piles (one for Servitors and one for Masters), or simply play one Ancient One and then play another, according to whatever selection criterion they prefer.

The game plays as normal, except for the following rules which take effect after the Servitor is defeated:

After completing these five steps, the investigators are ready to face the Master Ancient One. In the second leg, note that anything returned to the box after use (e.g. Elder Signs) will not be available. Thus players have only four Elder Signs to use to defeat both Ancient Ones.

Are you an Arkham Horror player? Feel free to leave your thoughts on these rules in the comments. My infinite thanks to Christopher G. Jennings for the Strange Aeons tool used to create the Dimensional Tracker graphics.