Described as "an audiovisual wilderness exploration game/plaything", Proteus is hauntingly reminiscent of certain retro-games, yet stunningly unlike anything you’ve seen or heard before. I caught up with Ed Key, one half of the team behind it, as he was moving house and asked him about the incredible world he is creating with musician David Kanaga.

Chris Bateman: Proteus, for anyone who hasn't played it, is a game of pure exploration – the tasks in it are thinned down to the point of being very nearly non-existent. Clearly, this is by design – you’ve mentioned before how the character of the play changed when you experimented with goals (what psychologists call ‘overjustification’). I’m curious as to how you came to commit to such a wonderfully thin play experience.

Ed Key: That’s interesting that you bring up ‘overjustification’ – I’d heard about it a while ago but not really thought about it in relation to Proteus. It makes a lot of sense in that context! I can't quite put my finger on why I think this, but I’m not sure it’s the whole story: it seems like there’s a distinct feeling of exploring a world where you have neither clear goals nor any indication of where the limits of the world are. One thing that we’ve avoided is any internal system to tell the player how many animals or events are yet to be discovered.

Chris: That’s become the norm, of course, thanks to Achievements and the like, so you take something of a risk pushing against that trend (albeit an admirable risk!).

Ed: Right, precisely because of achievements! It is a risky move, but it prevents any sort of “checklist” behaviour, even though that would have a certain primal satisfaction for the player. For me this is in tune with how we approach reality outside of games, whether it’s a scientific or creative endeavour.

Chris: So instead of explicit rewards, you have more implicit pleasures from the environment – and especially in the music.

Ed: The idea of a link between surroundings and music arose in the first few emails David and I exchanged. At first I wasn't sure if this was enough to hold people’s interest but it seemed to work well enough! I’m a great believer in not adding things if they don't “stick”, and since things like inventory mechanics and survival stats seemed to reduce the sense of immersion, I always removed what little I added. Instead we aiming for a density and variety of encounters and interactions using only the “move” and “look” verbs.

Chris: That’s one of the things I truly admire about the game, although I can’t imagine it began that way! Your old tumblr website mentions a project entitled Draco as an offshoot of Proteus that “might not go anywhere”. Did you originally plan Draco, and then found that the world you were creating was interesting in its own right? Or did you set off to sculpt Proteus, and considered Draco as a possible way to apply it?

Ed: Draco is one of several small prototypes I've made since starting Proteus that are also about exploring a landscape. These are mostly turn-based and heading towards something more about survival than just experience, playing with things that didn't fit in Proteus. The oil to Proteus's water.

Chris: Can you say anything more? 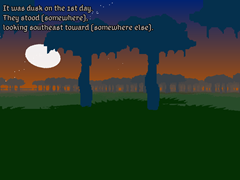 Ed: Here’s an old picture [reproduced right] of what Draco looked like at one stage, although it went through many forms.

Chris: Wow, I can immediately see a connection between that and the classic Mike Singleton game, The Lords of Midnight! Were you a ZX Spectrum gamer? Was Proteus influenced by early art/games like Deux Ex Machina (1984) or Psychedelia (1984), or early playground worlds like Mercenary (1985)?

Ed: Well, I grew up with a Spectrum but didn’t play any of those at the time. One game that seems like it would fit in that list that I did play was Captain Blood. Fantastically surreal, very French game about exploring a universe and talking to aliens.

Chris: Yes, the magazines loved Captain Blood, but I never managed to find a copy myself, alas. Which other games would you say directly inspired Proteus?

Ed: I don’t think I could point to any direct inspirations in games. I’ve always been drawn to portrayals of nature in games, from Monkey Island, Morrowind, Minecraft, etc, but it’s more of a general osmosis than building on any existing game.

Chris: I think that’s a common experience. The designers who can cite specific influences, like Anna Anthropy, seem to be the exception rather than the rule. What about the abstract art style? Surely that has an 8-bit influence.

Ed: I think growing up with 8-bit games informed that. Since starting on Proteus I learnt a lot about colour theory and abstraction in the fine art world, but I’m still learning.

Chris: You cite as inspiration the work of one of the Taoist philosophers, Master Zhuang, and you’re also friends with one of the British druids. I wondered about how these mythological themes fed into Proteus, and whether you see it as having a mythic dimension. Proteus almost seems to be a love poem to the natural world (including, to some extent, humans) – the sort of thing that can be found in great abundance in Chinese and Japanese poetry. Is there a conscious connection here?

Ed: Definitely! Proteus is absolutely a kind of wordless poem about the world and a certain way of looking at things. David and I had lots of long philosophical discussions over Skype about modes of experience, how meaning arises, and that sort of thing. Another big influence, especially on David’s side, is “A Voyage To Arcturus” by David Lindsay.

Chris: I know the book although I’ve never read it – it’s considered to be hugely influential, though, as it was published way back in 1920. Tolkien was supposedly a fan.

Ed: Yes, it’s this totally unique proto-sci-fi philosophical adventure story about a journey to another planet where the hero grows and sheds different sensory organs as he travels through different regions. It also features two new primary colours (jale and ulfire) and a Primer-like timetravel paradox.

Chris: You call it a game/plaything – are you uncomfortable considering it a game/artwork? Did you feel you had to qualify “game” because so many gamers expect goals and challenges when they hear that word?

Ed: These days I’m less shy about calling it a game than I used to be. I’ll definitely qualify it with some extra verbiage if the situation seems to warrant it, as I don’t want people to go into it thinking it’s something that it’s not, but I’m now pretty happy with saying it’s a game, especially as I’ve had so many votes of confidence since then.

Chris: Personally I don’t even see it as that close to the boundaries, to be honest – there is a definite game-like structure in operation, and tangible (yet subtle!) rewards in the soundscape (I always stop to chase a magic frog!). But people can be terribly protective of the term ‘game’ and can get quite angry about violations of their notions of gameness.

Ed: In a way it doesn't matter – for the most part I find the “what is a game” discussions pretty tedious and limiting. Most of the time these articles boil down to the author’s personal preference, and maybe some kind of anxiety about the status of the medium.

Chris: This was precisely the thrust of my Implicit Game Aesthetics serial, which excavates aesthetic value judgements in people’s definitions of the word ‘game’. The blurring of the boundaries of gameness is not something new, as something like Deus Ex Machina on the Spectrum showed. The magazines refused to give it a review score, and the same happened with Geoff Crammond’s The Sentinel (1986) even though these days no-one would doubt for a moment that it was a game.

Ed: Yes, there have always been “games that aren't really games”, like Cowboys and Indians and Snakes and Ladders. Maybe even the more free-form D&D style “isn't a game”.

Chris: I prefer to go the other way on this and throw the term as wide as possible. If freeform role-playing games aren’t games then I may never have played a game in my life, since that is how I try to play in all game worlds!

Ed: Probably the main reason for calling it a game is that it’s a nice short word that doesn’t sound too overblown, compared with “ambient experience” or whatever.

Chris: Yes, and Proteus is extremely rich in ambient experience. For anyone such as myself who is open to its low-res visual aesthetic, it’s stunningly beautiful. When I played the latest build for the first time, I cried. Now admittedly I’m an old softy and it doesn't take much to make be blubber, but I've never had a videogame reduce me to tears just because it was so beautiful. I wonder – do you really appreciate just how special Proteus is?

Ed: Wow! I guess I’ve realised that a lot of people really like it!

Chris: Doug Wilson over at ITU Copenhagen has also heaped praise on it, and suggested that it's an important title – I heartily agree with him.

Ed: Doug has definitely been tireless about spreading the love for it.

Chris: I refer to Proteus in a forthcoming paper on game aesthetics alongside artistically motivated games such as The Graveyard and Journey – have you ever seen yourself as an artist or a creator of art?

Ed: As someone who’s lived with this thing for over three years as it slowly grew, it’s really hard to have an objective view of it, but I’m proud that we stuck to our principles and created something with very few compromises. In that sense I do have to consider it “art”, even though the word has some baggage attached – going back to the whole “are games art” debate that was so fashionable recently.

Chris: I hope that my philosophy book Imaginary Games is the nail in the coffin of the counter-arguments to games qualifying for artistic status – but perhaps a lively argument never dies! What about your contribution to this, though: are you comfortable having made something that is going to be used to help defend games as an artistic medium?

Ed: I’m definitely happy with Proteus finding a use in that way!

You can learn more about Proteus and preorder for access to the latest builds at Visitproteus.com.