Home Archives Profile Subscribe
Artgames: The Infinite Shelf and the Market Shadow
Twitter Got Me: Save Yourself! 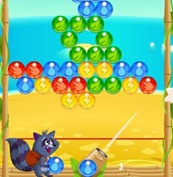 Squirming in my seat in some of the talks at Casual Connect last week, I was struck by the extent to which the job of "game designer" for the diversions marketplace has very little to do with the traditional perspective of game design as idea creation and development. Almost all the successful projects in this space are designed by someone whose role could be better described as a game duplicator.

Wooga's presentation was most shocking in this regard: their title Bubble Island (pictured above) was little more than a reskin of Puzzle Bobble (also known as Bust a Move): Taito did all the work on the conceptual design of their product in this case, and in fact as far as I could tell every one of their games was wholly derivative upon an original Japanese game design from the last twenty years. They were by no means the only company working in the social games space for whom this is true.

Now I want to be clear that a game duplicator is still a game designer – the core role of the designer is to coordinate the development of the design components of a game, and even if you are simply cloning someone else's design you still require genuine game design skills to achieve this. There can, in fact, be considerable challenges, especially when adapting from an arcade-style format to a social games platform. Also, I want to be clear that even most AAA console game developers are essentially game duplicators: the FPS game (or gun game) is perhaps the most stable format around, and innovation in the design of these games is neither needed nor in much evidence in new titles.

However, in so much as game design is thought of as a creative profession, there can be little doubt that there is a vast gap between (say) Shigeru Miyamoto and (say) a game duplicator at Wooga. I do not want to suggest that game duplication is not a legitimate and valuable profession, but I do want to suggest that a game duplicator should be considered a production role and not a creative role. Production is very important in games as an industry, but if we don't distinguish production from creativity we risk becoming confused about what the medium of games is really about. Right now, it's about making money, and game duplicators are in more demand than game designers. I suspect this may always be the case from now on.

So should we esteem game designers more than game duplicators? I think it's clear that we already do. No-one gets plaudits for copying someone else's design. But commitment to innovation is a big risk in the commercial space, and there is a sense, therefore, in which game duplicators are more reliable and trustworthy than game designers (in fact, this value judgement may be embedded in the distinction between production and creative roles I made earlier). Game designers can be – and frequently are – prima donnas who let their own pride and ego get in the way of their obligations to their employers and co-workers. If your commitment to originality causes your company to go bankrupt and puts your co-workers into the unemployment line then you might well be a creative genius, but you are also a narcissistic loser with no respect for your colleagues.

To create an original game is an achievement – to create as many as Miyamoto-San is incredible. But originality is a luxury that cannot always be afforded. Sometimes a good professional must curtail their desire to create in order to meet the practical requirements of their employment. If you only want to innovate, you may need to set up your own shop or (more likely) play at being the ‘starving artist’. If you aren't being paid to innovate, don't betray your co-workers by gambling with their jobs in order to feed your desire to feel creative.

Game duplicators are central to the diversions market because this audience is mainly seeking familiar fun, not inventive novelty. The companies that employ this kind of game designer are grateful for their restraint in not trying to wildly invent all the time. They all owe, however, a tremendous creative debt to game designers who paved the way. The very least they could do is offer their thanks to the talent behind the concepts they have raided and copied. The duplicator behind Bubble Island should thank Seiichi Nakakuki for their work on Puzzle Bobble, work that Wooga's design undeniably incorporates. The duplicator behind Farmville should thank Yasuhiro Wada for Harvest Moon, the progenitor of all farming games. This list of debts is endless, the expression of gratitude scant. Admitting influence is not admitting commercial liability – game design ideas are not subject to intellectual property law. Denying influence is not only arrogant, it is rude, or at the very least ignorant.

Sandy Peterson, the creator of Call of Cthulhu, was the first game designer I ever heard offer thanks to the people whose ideas his design borrowed. He noted that tabletop war games almost always included a section on the origins of the various rules and conventions, but role-playing game designers upheld the myth that their games "spring full grown from their designers' heads, like Athena from Zeus". I have tried to follow his example. All game designers are, at some level, game duplicators, and to pretend otherwise is pure egotism. Admit your influences, and recognise that the production role of the game designer is generally more important than the creative role, even if all the glory seems to reside in originality. We all stand on the shoulders of giants. Have the grace to thank them for their assistance.

Great article as always! It is a little sad tough that this is the Status game designer should also place themselves in. Kinda reminds of the Article by Walter Benjamin, The Work of Art in the Age of Mechanical Reproduction.

Rose: thanks for the kind words! The comparison with Benjamin is especially apposite. :)

My hope is that once we get through the growth of the industry into the mass market (something I've been an evangelist towards for a good decade, so I'm reluctant to criticise companies like Wooga for actually doing it!) we might get to a mature circumstance where artgames can begin to play a more significant role.

We still have a long way to go, though!