A Play Set for Game Design 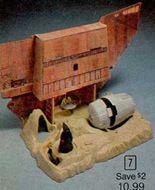 Last week we looked at how prop theory can clarify game design by identifying components of a toy chest containing the principal and central props used for the play of digital games. This week we continue to consider the first and third person fully-rendered fictional world but look at another aspect of the toy chest paradigm – the play sets within which the individual toys are used.

Beyond the dolls and models (and their various trimmings) lie the toys which make up the wider substance of the fictional world itself. These are like the child’s play set, within which individual toys are placed for specific games of make-believe. When a plastic Godzilla appears in the parking garage, we are playing monster attack. Similarly, the contents of the toy chest combine with the following props to dictate specific opportunities for play. In these cases, the toy metaphor often gives way to the paradigm of the film set, which in many respects is analagous to the child's play set.

There are other props which have radical effects on the play of games but do not fit into the toy chest or play set metaphor in quite the same way as those discussed in the previous two sections.

The props identified last week and this week are in no way an exhaustive list of the toys to be found in digital games, but collectively they demonstrate the general framework being proposed – one which draws parallels with children’s toys on the one hand and movie productions on the other to encourage thinking about the elements of games from an explicit viewpoint of play rather than of game.

Furthermore, the perspective brings to the fore the way in which various props can dominate or heavily influence the play of digital games. Weapons and toy soldiers dominate the play in any fictional world whenever they are a part of the toy chest, and models and obstacles carry similar (although less pronounced) risks. Money props – especially in the form of experience points – have a severe dominating effect. Another significant risk for domination of play occurs with tasks and collections, and particularly puzzles, each of which makes the play more rewarding for players willing and able to co-operate, but at the cost of closing down accessibility from anyone not open to that kind of play. (My comments on the way in which enduring hardship ultimately enhances enjoyment is relevant here).

It may be illuminating to pursue the reasons that certain props dominate play, and the way in which this domination necessarily creates a barrier for anyone uninterested in playing this way, since somewhere in this perspective lies valuable lessons for commercial game development – and invaluable opportunities for art games seeking to carve out new play experiences beyond the obvious tropes. By using prop theory as a lens, game design may be able to tease out more playful combinations of toys, or at least better understand how it is that the kinds of play we are presented so often end up in surprisingly narrow forms.