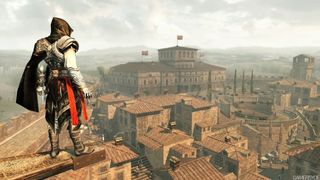 Except for the FPS slice of the market, which currently supports two major titles, specific styles of play currently support just one major franchise, with a secondary franchise able to do decent business but always significantly fewer unit sales than the leading title. This begs the question as to whether the publishing community has overlooked some possible market segment possibilities for the gamer hobbyists on the power consoles.

Looking at what's currently being offered to hobbyist players:

Note that MMOs seem fairly weak as a commercial force on the power consoles – the PC owns this space, or rather, Activision-Blizzard owns the space because they own World of Warcraft, which is offering cities/wildernesses with melee and magic play, plus highly detailed reward structures, and operating in the Platinum range – the only fantasy game doing good numbers right now.

It seems that the minimum to compete at the top of this part of the market for videogames is to offer two out of three of the following:

Halo 3 is managing to get by with just one of these key features (multiplayer), but has yielded control of this slice of the market to Modern Warfare which does offer detailed reward structures – and shrewdly, it does so in its multiplayer, recognising that this is the core of its appeal. The Assassin's Creed franchise is doing rather well for games with neither multiplayer nor detailed reward structures – it benefits from being king of the castle in environmental play, since everyone else has focussed on guns instead of swords. It's only serious competitor is Uncharted 2: Among Thieves, which offers environmental play with multiplayer, but suffers from a certain schizophrenia: the choice of firearm play puts its multiplayer mode in competition with the biggest hitters, and the absence of a city (it has set-piece play instead) weakens the appeal of its single player game. Honestly, it will be lucky if it can make it to Gold – despite the quality of the product, it's not a great fit to the current marketplace, and seriously hobbled in commercial terms by being a PS3 exclusive.

The following opportunities could be taken advantage of by the (very few) companies with the assets to compete at the top of the hobbyist marketplace. I'm not including MMO concepts – I'm not convinced it's sensible to compete with World of Warcraft on the power consoles with their comparatively small installed base versus PC. In no particular order, here are some possible market opportunities:

Every one of these suggestions implies game concepts without firearms – it's my claim that the firearm space is currently overcompeted, while fantasy settings, environmental play etc. are currently undercompeted – there's a rare opportunity here for a developer with the resources to aim for the top, and a publisher who can see the market for videogames as more than a race for the next me-too game.