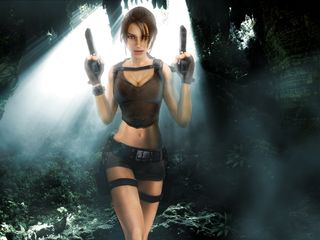 My friends from the IEEE Player Satisfaction Task Force, Georgios Yannakakis and Alessandro Canossa, along with Anders Drachen (who presumably led this research project), have just published a fantastic paper entitled Player Modeling using Self-Organization in Tomb Raider: Underworld. What they've done is studied data concerning player deaths, completion times, and help-on-demand usage in Crystal Dynaimcs' Tomb Raider: Underworld and then used a cluster analysis technique (like the one we used for DGD1, but significantly more advanced) to identify play styles among players who completed the game.

Cluster number 1 corresponds to players that die very few times; their death is caused mainly by the environment and they complete TRU very fast. These players’ HOD requests vary from low to average and they are labeled as Veterans as they are the most well performing group of players despite the high number of environment-related deaths. Likewise, cluster number 2 corresponds to players that die quite often mainly due to falling; it takes them quite a long time to complete the game; and they do not appear to ask for puzzle hints or answers. Players of this cluster are labeled as Solvers, because they are adept at solving the puzzles of TRU. Their long completion times, low number of deaths by enemies or environment effects indicate a slow-moving, careful style of play with the number one cause of death being falling (jumping).

Players of cluster number 3, form the largest group and are labeled as Paciﬁsts as they die primarily from active opponents. The total number of their deaths varies a lot but their completion times are below average and their help requests are minimal indicating a certain amount of skill at
playing the game. Finally, the group of players corresponding to cluster number 4, namely the Runners, is characterized by players that die quite often and mainly by opponents and the environment. These players are very fast in completing the game (similar to the Veterans), while having a varying number of help requests which cover the majority of the H value range.

In other words, their results show four distinct play styles: Veterans, Solvers, Pacifists and Runners. I can't help but notice parallels with the BrainHex classes, which I'll discuss below.

I have one major complaint to make, however: the data that was modelled consisted of the 1,365 players who completed the game. This is just 5.4% of the 25,240 players who attempted it during November 2008, when the study gathered its data. It's already quite well established that the majority of players don't finish the videogames they attempt, so in a sense what is going on is a breakdown of the most dedicated gamer hobbyists, with a lot of useful data about the wider audience blanched out. However, they plan follow up work using more fo the vast data Eidos (the publisher) was able to afford them so I shall look forward to seeing further results.

This paper represents a major step forward in play satisfaction modelling - finally we have a play style model derived from a single major commercial videogame. I believe we will see more and more of this kind of modelling in the years to come, and each such model will contribute greatly to our understanding of play.

Alessandro has already chided me about treating these results as being anything other than endemic to this specific game, but nonetheless I cannot resist suggesting how these results might map onto BrainHex:

In a sense Drachens, Canossa and Yannakakis are working bottom-up on the problem I have been working top-down on - eventually we will meet in the middle and shall know far more about how and why people play games.