The Crowd as a Player 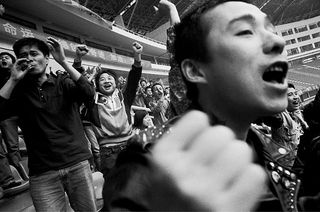 In a sporting match, does the crowd merely spectate? Or should the fans be considered another player?

Although my own personal interest is more in videogames and board games, since these are what I professionally design, I am fascinated by all forms of play, and professional sports interest me more as a psychological phenomena than they do as an activity to follow. Watching other people's commitment to their football, baseball and basketball teams fascinates me, as their behaviour in this regard is often far more compulsive than any videogame addict (perhaps with MMOs excluded). Fans watch their team play every week, with religious dedication. They become quite upset if they miss a match.

Watching from home, one can easily argue that the player's sense of connection to the match is that of a spectator (although the individual may feel they have an influence on the outcome - even, sometimes, if they are watching a recording, since our impressions of agency need not be rational). But from the stadium itself, the crowd is something more than a spectator. They can actually influence the outcome of the match.

The most obvious example is with crowd noise: in a game of American football, for instance, in which the play requires expert co-ordination between the players, which in turn requires accurate communication, the roaring din of the home team can put off the visiting players, potentially leading to an edge. Then of course there is the effect on the morale of either team - there is certainly a psychological advantage to hearing a stadium full of fans cheer you on, and a disadvantage to having them shout you down in disgust. The term "the twelfth man" has been used in both football and American football to indicate the extent of crowd influence in the game.

With this in mind, is it really reasonable to consider the crowd as mere spectators? Are they not something close to an extra player - a super-organism of fans acting as one collective extra player for their team? And if so, what does this tell us about the disposition of play?

I'm not sure I would consider the crowd close to "an extra player". I am thinking of other spectator sports that are less team oriented -- the crowd can still be a factor there. Time trial sports, like track & field, where there is not direct competition between teams. Obviously, performing in front of a crowd, and competition, does have some kind of psychological effects on performance.
But -- does the crowd booing you necessarily have a negative effect on your performance? I'm sure it differs for each individual, but for some people it may have the effect of giving them the mindset of "I'll show them what I'm really made of!", thereby increasing the psychological pressure and increasing the performance.

If we can assume that cheering and booing affect each player differently (and that each may encourage some to perform better, and some to perform worse), we also may be able to say that the crowd does not actually influence the game (because the positive and negative influences will cancel each other out)... Then, the crowd merely contributes to the "psychological energy" of the match.

It's an idea, anyway.
Your site always gets my brain flowing! Thank you for providing this service :)

I thought it was well documented that a team playing at home has a greater chance of winning (not sure what sport I saw figures for, it was a while ago). However the figures I saw made no mention on how the location of the match was determined. Are matches located depending on which team are the favourites?

Katherine: each sport has its own rules for determining home and away. It varies between the kind of tournament and the sport involved, but it's always rigorously specified in advance.

Scott: it's a difficult thing to get empirical data on, but as Katherine says there's certainly a proven statistical advantage for the home field - but this, of course, entails much more than just the fans (the physiological effects of travel, the psychological effect of being on "someone else's turf" etc.)

What interests me about this is the following aspect:

We think of play as something *active* you do, and spectating as something passive. Yet in the case of the crowd within the stadium, they are spectating and yet are still active in the play.

We assume that "agency" in play (ownership over one's play actions) means making decisions, or choosing actions or some such, yet the crowd deny this to some extent... The fans don't *decide* to cheer - at least, they don't at an individual level - they are *swept up* in the mood of the match...

I suppose I'm suggesting this is another example of play without decisions, but one could certainly argue against me! :)

My research has highlighted dice play in tabletop RPGs as an area where players feel they have agency, when pragmatically there is no grounds for what would normally be assumed as a foundation for agency. But people *believe* they affect the outcome of a die roll (of course, they do - they just can't control how, psi experiments not withstanding) and that gives them agency.

In the case of the crowd, the fan also believes they have agency - as in the case of "armchair supporting" which outside of some wild hypothesis has no casual connection to outcome of the match. In the stadium, the crowd has an influence, at home they don't... but either way the fan *feels* the agency - they play the game along with the players.

I don't know if I'm managing to make my point here, but I suppose I am suggesting that all the fans - even the armchair supporters - are in some sense *playing the match*... they are not just observing.

But when I watch these matches, since I have very weak or non-existent team affiliations, I really am a spectator.

I find this sort of examination of the fringe cases of play quite fascinating, although they also become terribly abstract quite rapidly!

Thanks for the comments!

I used to know a football fan who changed the channel when his team was about to score because he thought watching it would jinx it. Guess he'd fit right in with the people who think they affect the outcome of a die roll.

Sirc: what, you don't think you can alter the outcome of a die roll? You should try harder. :)