Ghost Master - Worth Waiting For 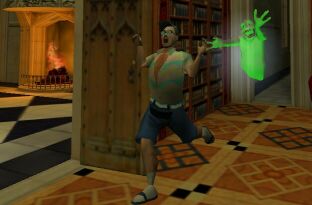 Having debuted at this years E3, Ghost Master (designed, level designed and scripted by International Hobo Ltd) attracted some extremely positive press from this years ECTS. Trusted industry newspaper MCV reported "journalists are now tipping it to be a surprise Christmas hit" and one critic described the game as "...definitely something new in a panorama of way-too-similar games."

Ghost Master, developed by Sick Puppies (a studio of Empire Interactive, who will also publish the game in Europe), is an innovative haunting game, in which the player leads a team of phantoms, banshees, gremlins and other haunters to scare the hell out of everything that breathes. Creative director on the game is industry guru Gregg Barnett, the man behind numerous classic 8-bit games and several chart-topping adventures.

Although initially slated for an October 2002 release, Empire has recognised that a quality title such as Ghost Master deserves special attention, and has opted to allow a few extra months for polish and tweaking, as well as shrewdly avoiding the seasonal crush. Advertising rates at Christmas skyrocket, making it an inadvisable time to launch a new brand and a better time to release licensed games and sequels. Products featuring licenses such as Harry Potter and WWF usually dominate the Christmas sales, and many deserving games have been lost in the Christmas hubbub.

International Hobo's managing director Chris Bateman, MSc is quoted in MCV saying: "the Christmas choke point occurs in all media sales... everyone wants the 'Christmas number one', because it means dramatically inflated sales - but this bonanza is at the cost of poor sales for the majority of products. Smart companies only release major products at Christmas if they are definitely in the running for the top spot - otherwise holding back to the following quarter is preferable."

"This product has significant potential," chief executive of Empire Ian Higgins stated. "We believe that for it to become a successful franchise it is essential to ensure that the released version of the game is of the highest quality possible."

Ghost Master's new release date has not been finalised, but early Q1 2003 is expected.