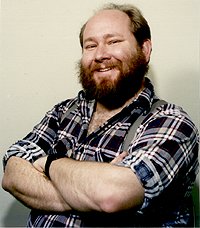 International Hobo Ltd is pleased to announce the addition of veteran games designer Ernest Adams to its team of design and script agents. Ernest was behind a number of successful titles for EA including several of the Madden range of American football games. Later he was employed as Lead Game Designer at Bullfrog Productions before joining International Hobo.

His addition to Europe's leading Games Consultancy expands both the client and skill base, and is accompanied by an internal restructuring to maximise the use of his talents, as well as a comprehensive revision of the pricing structure.

Managing Director Chris Bateman says of the restructure: "We're excited to have Ernest join the team, as his experience both supplements and complements our existing knowledge of the design process and AI techniques. The timing is excellent, as a number of new projects are expected to be announced over the next few weeks. We are certain to put Ernest's talents to good use."

Ernest's first role as a member of the ihobo team was to represent the company at this year's Game Developer's Conference in San Jose.